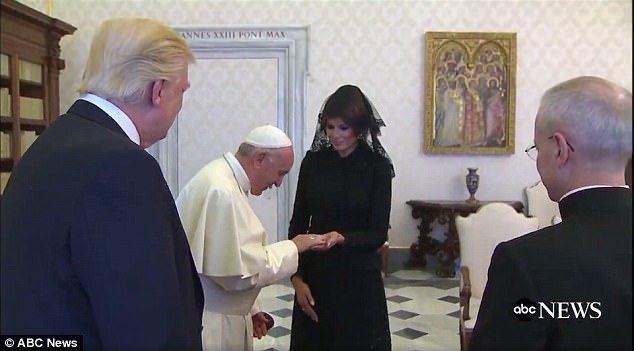 Pope Francis blessed a rosary as first lady Melania Trump held it in her hand Wednesday, during a meeting at the Vatican; DailyMail.com can reveal that she is a practicing Catholic

(The Daily Mail) When Melania Trump recited The Lord's Prayer before a Melbourne, Florida presidential rally in February, the Internet went hog wild.

Now we know one reason why the first lady began with 'Let us pray' and 'Our Father who art in heaven' when she introduced the president that evening: She's a practicing Roman Catholic.

Her spokeswoman Stephanie Grisham confirmed that to DailyMail.com on Wednesday, hours after Pope Francis blessed a rosary for her at the Vatican.

The last Catholics to live in the White House were John F. Kennedy and his wife Jackie. Melania and her son Barron will move to 1600 Pennsylvania Avenue over the summer.

Mrs. Trump did more than just show up for a Papal audience.

She spent time in prayer at the Vatican-affiliated Bambin Gesù (Baby Jesus) Hospital, and laid flowers at the feet of a statue of the Madonna... (continued)


Read More at The Daily Mail

ROME (ChurchMilitant.com) - The results of the Vatican's official investigation into Medjugorje are in — and they paint an overall negative picture of the authenticity of the alleged Marian apparitions. The final tally on authenticity of apparitions from 1982 onwards resulted in zero votes in favor, two votes against, and 12 votes claiming no opinion could be given.

The first seven apparitions, which reportedly took place in 1981, received a generally positive response, with 13 members of the Vatican commission voting yes as to their supernatural nature, one voting no, and one vote suspended.

But the second phase — which include the 35 years from 1982 to the present day — received a strongly mixed reaction, including a final tally with zero votes in favor of the supernatural nature of the apparitions.

According to Vaticanista Andrea Tornielli, "the commission took note of the heavy interference caused by the conflict between the bishop and the Franciscans of the parish, as well as the fact that the apparitions, pre-announced and programmed individually for each seer, continued with repetitive messages."

In 1999, the Franciscans who served as spiritual advisors to the children were expelled from the diocese of Mostar-Duvno by their bishop, Ratko Peric, as well as by the Father General of the Order of Friars Minor, for disobedience. The Vatican approved the joint expulsion.

In 2008, the Congregation for the Doctrine of the Faith launched an investigation into Fr. Tomislav Vlasic, spiritual director to the child visionaries, whose bishop suspended him "for the diffusion of dubious doctrine, manipulation of consciences, suspicious mysticism, disobedience toward legitimately issued orders," as well as charges of sexual immorality.

Vlasic was eventually defrocked by Pope Benedict in 2009. In 2012, Vlasic released a video promoting the New Age movement Central Nucleus, and admits he's been involved in this since 2002 — back when he was still spiritual advisor to the Medjugorje seers.

On this second phase of the purported apparitions, the Vatican committee voted on two separate issues: (1) spiritual fruits, and (2) the conduct of the seers. On spiritual fruits, six members voted positively, while the remaining 10 said the fruits were a mix of positive and negative.

As to the conduct of the visionaries, 12 members said no opinion could be given, while two voted against the supernatural nature of the alleged visions.

Just as significant, the head of the Congregation for the Doctrine of the Faith, in charge of overseeing the faithful diffusion of Church teaching, is expressing skepticism over the authenticity of the Medjugorje visions. In Tornielli's words, Cdl. Gerhard Müller's opinion is "considered an authoritative contribution to be compared with other opinions and reports." As critics have noted, the messages include questionable doctrinal content, including the fact that "Our Lady" regularly prays the "Our Father" with the seers — something Our Lady refused to do at the Church-approved apparition of Fatima, because it includes the line "forgive us our trespasses." As the Church teaches, Mary is without sin, so she could not ask for forgiveness of her sins.

The Virgin also reportedly said, "All religions are equal before God" — espousing the heresy of indifferentism, explicitly condemned by the Church. She similarly remarked elsewhere, "It is you who are divided on this earth. The Muslims and the Orthodox, like the Catholics, are equal before my Son and before me, for you are all my children."

She is also said to have offered the very protestant remark: "I do not dispose of all graces. ... Jesus prefers that you address your petitions directly to him, rather than through an intermediary."

In spite of the generally negative view of the vast majority of the Medjugorje apparitions, the Vatican must consider how to deal pastorally with the millions of pilgrims who flock to the Bosnian town each year. In this regard, 13 commission members voted in favor of lifting the ban for pilgrimages there as well as establishing the parish as a pontifical sanctuary, with oversight by the Holy See, and which would not denote any recognition of the authenticity of the apparitions.

The final decision now rests with Pope Francis, who most recently appointed Poland's Abp. Henryk Hoser to undertake a special mission of the Holy See to "acquire more in-depth knowledge of the pastoral situation" and to "suggest any pastoral initiatives for the future." Hoser is expected to submit his conclusions to the Holy Father this summer, after which Pope Francis will make his decision.

On Saturday, on his return flight from Fatima, Portugal, the Holy Father expressed skepticism about Medjugorje.

"The report has its doubts, but personally, I am a little worse," he told reporters. "I prefer Our Lady as mother, our mother, and not Our Lady as head of the post office who sends a message at a stated time."

He continued, "This isn't Jesus' mother. And these alleged apparitions don't have much value. I say this as a personal opinion, but it is clear. Who thinks that Our Lady says, 'Come, because tomorrow at this time I will give a message to that seer?' No!"