Can a Monkey Save NBC? 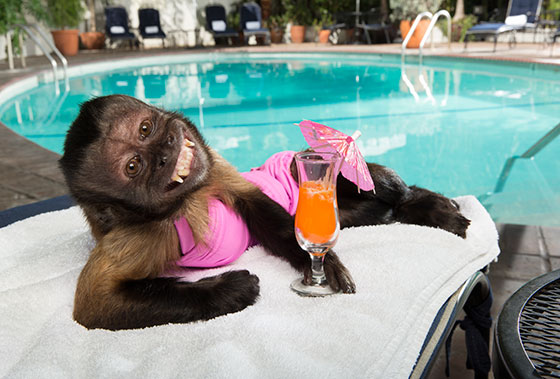 (New York Magazine) On July 24, at the Beverly Hilton in Los Angeles, the cast of the new NBC sitcom Animal Practice were finishing up a panel presentation for the Television Critics Association’s summer press tour when a siren pierced the auditorium. From the wings, a miniature, remotely controlled ambulance raced onto the dais; perched atop it was a small monkey wearing blue surgeon’s scrubs and holding a card emblazoned with the peacock logo. Hovering conspicuously in the background at the event was NBC’s perennial fourth-place ranking in prime time, and the symbolism of an ambulance-riding capuchin—can a ­monkey save NBC?—was barely latent. But this wasn’t any old monkey.

At 18, Crystal has an IMDb page longer and, though it’s curiously incomplete, more hit-studded than most actors three times her age. You may have seen her in American Pie, 3:10 to Yuma, Dr. Dolittle, Zookeeper, or We Bought a Zoo. “We feel this is Crystal’s breakthrough performance,” said Zoo director Cameron Crowe. “It is her Carnal Knowledge. The role brings out colors we have yet to see...”

NBC Entertainment president Jennifer Salke has told advertisers that Crystal is the highest-testing character on any of the network’s new slate of shows. But the capuchin’s fame has already spread well beyond ­focus-group screening rooms. On a plane back to L.A., a passenger turned iPhone paparazzo took a snapshot of Crystal belted into her business-class seat on American Airlines, a full human meal in front of her. (Celebrity monkeys: They’re just like us.) At LAX, TMZ filmed her as she rode on Gunderson’s shoulder out of baggage claim...

Crystal reportedly earns $12,000 per episode of Animal Practice, and she is a presence in every one, whether cheering on an illicit turtle race (a guinea pig riding on each turtle’s back) or crawling inside and animating a puppet to haunt a ­puppet-phobe. When I meet her in the Astroturf atrium, Crystal, wearing spangled denim board shorts that conceal a diaper, shakes my hand with a miniature paw. She is standing on the lap of her trainer and moving from one of his knees to the other, over and over, while making occasional high-pitched tee-tee-tee sounds. She seems anxious, but Gunderson says she’s probably just bored.