(Mail Online) New rules on school meals inspired by Michelle Obama were intended to wipe out hunger and malnutrition among American students - but some are complaining they have had the opposite effect.

High schools are now forbidden from giving pupils more than 850 calories for their lunch - even if they are fast-growing teenagers or even student athletes.

One enterprising group of adolescents channelled their anger at the policy into a parody YouTube video promoting their cause entitled 'We Are Hungry'. The new restrictions were mandated by the Healthy, Hunger-Free Kids Act of 2010, signed into law during the lame-duck period of the last Congress in December 2010.

As well as the calorie limits, the law requires students to be given more fruit and vegetables and cuts down on sweet and fatty foods...

Brenda Kirkham, a colleague of Ms O'Connor at Wallace County High School in the farming town of Sharon Springs, told the Wichita Eagle she was outraged at seeing students go hungry thanks to government rules. 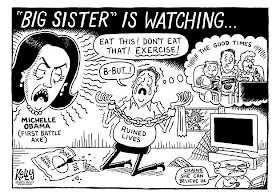 'Think of a high-school boy who works out at least three hours a day, not including farm work,' she said. 'I'm furious.'

Some pupils have turned to radical solutions to get round the ban on sugary snacks - at one school, a black market has sprung up in chocolate syrup.

Students at a high school in New Bedford, Massachusetts are bringing syrup into school and selling it to friends so they can make their own contraband chocolate milk, according to the Standard-Times.

'Flavored milk... I don't understand why we can't have that,' said 17-year-old Paige Lame.

Another unintended consequence of the rule is that charity groups are unable to sell cookies or candy to raise money for good causes and student activities, thanks to a crackdown on the availability of junk food on school property.