Growing number of Catholics push for return to Latin Mass 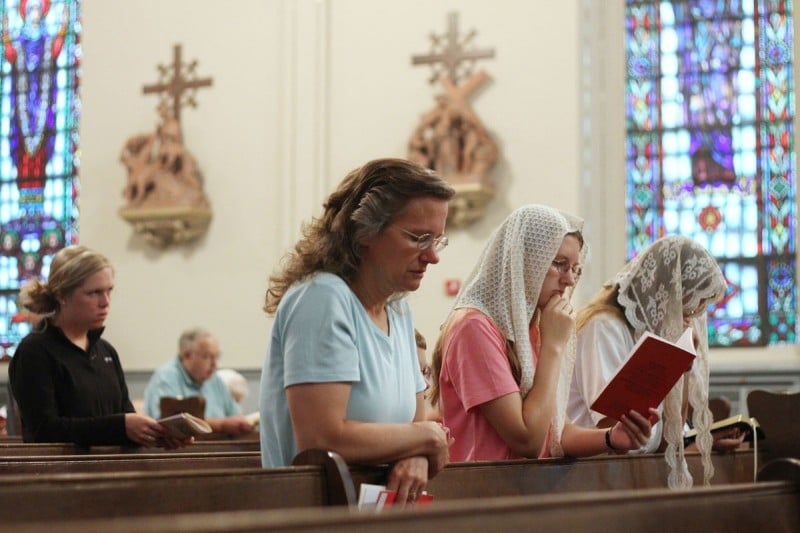 Jane Latz of Carthage, Ind., attends a recent Latin Mass at Holy Redeemer Catholic Church in Madison with her children Kristina, 16, center, and Theresa, 19. The family was passing through Madison on a vacation and sought out a Latin Mass. (Photo: Amber Arnold)

For the next hour, she and many of the other parishioners followed along in the book as the Mass unfolded mostly in Latin.

For centuries, this was the only way Catholics around the world experienced Mass. Reforms ushered in by Vatican II in the 1960s largely eliminated Latin Mass, but now, across the country and in the Madison Catholic Diocese, traditionalists are seeking its comeback. 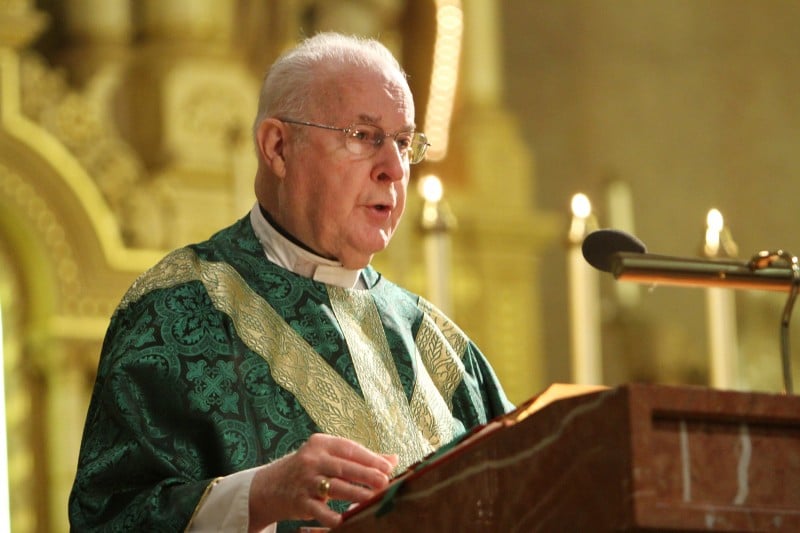 "There's this incredible sacredness you can feel and taste and see — it is not just a social gathering," said Jacek Cianciara, 67, of Madison, one of the parishioners helping to bring back Latin Mass locally.

Other Catholics find the older style needlessly difficult to follow and too passive.

"When it's in Latin, it's just rote — you're not reading the words for the real meaning," said Alice Jenson, 66, of Fitchburg. "I'm opposed to having this artificial barrier being put up." 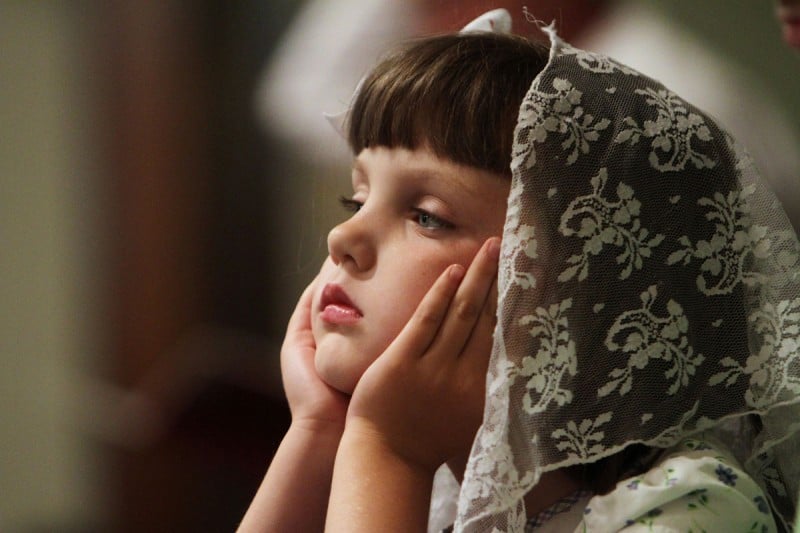 Liesl Howard, 6, of Janesville, attends a Latin Mass at Holy Redeemer Catholic Church in Madison with her family. (Photo: Amber Arnold)
Catholics now can attend a Mass in Latin somewhere in the 11-county diocese every day, although the vast majority of worship services remain in English. About 200 Catholics consistently attend a Latin Mass at least weekly, with others dropping in periodically, the diocese estimates.

That's a tiny slice of total church attendance — about 57,000 people attend Mass in the diocese each week — but it's a vocal and growing slice.

Latin Mass, also known as the Tridentine Mass, is distinguished by more than language. The priest faces the altar, which traditionally faced East, the direction from which Catholics believe Christ will return. 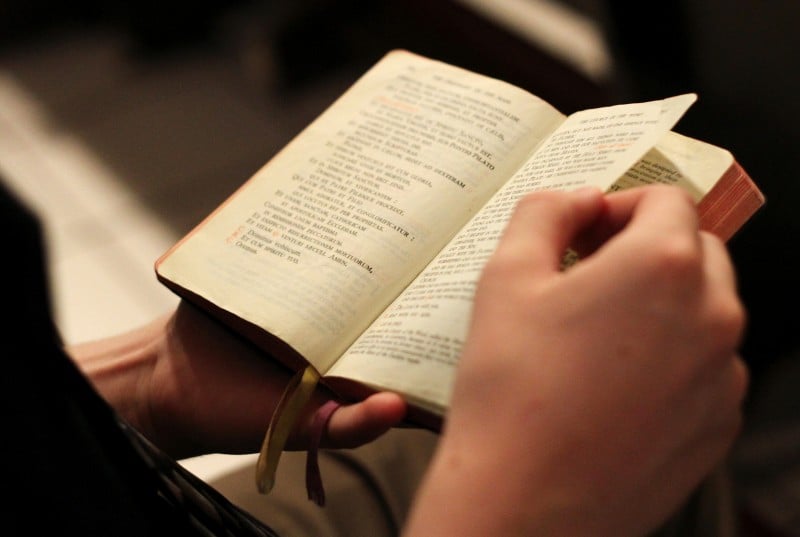 A Holy Redeemer parishioner follows along during Latin Mass in a book that translates the Latin into English.  (Photo: Amber Arnold)

This means the priest has his back to the people, which traditionalists view as appropriate, like a general leading his troops.

The priest speaks in a low, quiet voice, rendering the Latin largely and intentionally inaudible to parishioners. That's because the priest should be praying to the Lord in their name, not proclaiming something to the people, said Monsignor Delbert Schmelzer, 81, one of the diocesan priests who leads Latin Masses.

"That emphasis is a world of difference," he said.

Gregorian chant is the required music, sometimes accompanied by an organ or singing. Female altar servers are not used because traditionalists believe the role should be reserved for boys, the only ones who can become priests.

Only the priest reads the Scriptures or distributes Communion.

The 1962-65 Second Vatican Council introduced Masses in local languages, and reform-minded theologians followed with a host of other changes that loosened the structure of the worship service and increased roles for laypeople. 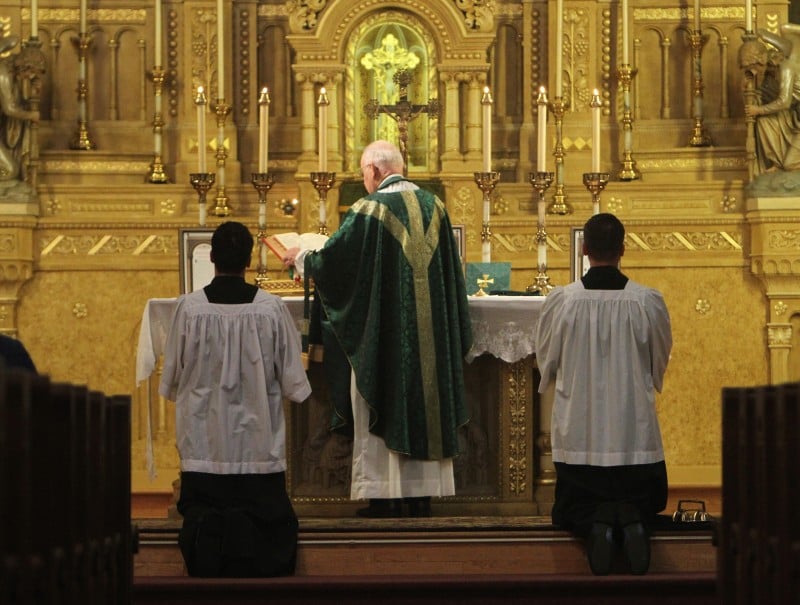 During the old-style Latin Mass, the priest faces the altar, not the people. Here, Monsignor Delbert Schmelzer celebrates Latin Mass at Holy Redeemer Catholic Church. (Photo: Amber Arnold)
Girls were added as altar servers, and church members started assisting priests as Scripture readers and Communion distributors. The music expanded to include guitars, folk choirs and hymns such as "Amazing Grace."

Priests began facing the people instead of the altar.

"Vatican II shifted the emphasis to draw more on the talents and abilities of people who are not ordained — the idea that, ‘It's my church too,'" said the Rev. Steven Avella, a history professor at Marquette University in Milwaukee and a Catholic priest.

The same principle was behind the translation of the Mass into the native tongue, Avella said. "People could understand what was being said and respond in their own language," he said.

For traditionalists, the changes were unfortunate.... (continued...)