What did Mr Hjelm ask? Here's his own account:


What I asked Governor Perry was “Considering state debt has nearly tripled and spending has increased by two thirds since you were governor, and also that ACORN considered your help their ‘proudest moment,’ what were the differences between him and the current liberal president?” As you can see, he immediately tried to excuse away the numbers.

This is a challenging line of questioning, but it was set forth politely, and I would have liked to have heard Mr Perry's reply. Mr Perry had started to say "I don't know where..." and then changed course. When Mr Hjelms talked over him to cite his source, replying to what he took to be the thrust of Mr Perry's abandoned first response, and when he continued to try to say where he got his numbers, Mr Perry used the opportunity to act as though Mr Hjelms was not actually interested in a response and moved on. "You obviously don't know what you're talking about, brother", he added in valediction, which is somewhat ironic, as Mr Hjelms was trying to explain how he knew what he was talking about.

I enjoyed witnessing this fleeting, close-up moment of flesh-pressing campaign politicking. Mr Perry's skillful exit from the exchange, his calmly assertive demeanour (note the way his initially attentive eyes narrow into a challenging "kiss off" grin, the way he presses his index finger softly into Mr Hjelm's chest) and the folksy leavening of his denigrating parting shot, all suggest to me a seriously skilled retail politician whose swagger remains mostly charming even when he's being an impatient prick. Meanwhile, Mr Hjelm's question and his follow-up blog post reveal an emerging line of attack on Mr Perry from the most fervently small-government precincts of the tea-party right: Mr Perry is a big-spending, lobbyist-loving, Al Gore-supporting ex-Democrat who is all pork and no tricorne.

Sarah Palin, who may yet enter the race, recently retweeted a blog post featuring these charts: 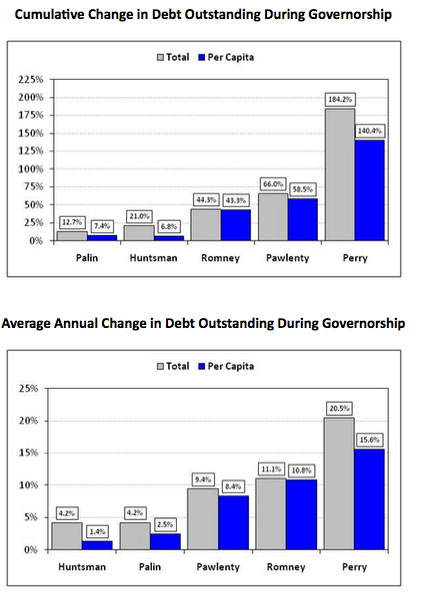 It seems that a good deal of Texas' debt comes from bonds issued to finance new infrastructure. Given Texas' population growth, the last several years' low interest rates, and a large pool of un- and under-employed workers, this might be smart government. But try telling that to Mrs Palin, or Michele Bachmann. Mr Perry's going to have to do better than "You obviously don't know what you're talking about, sister", even if it's true.