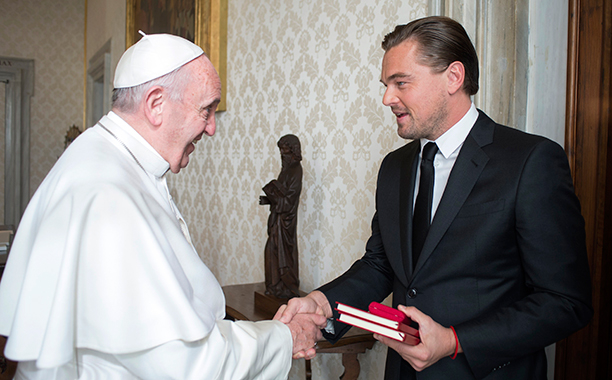 The actor had a private meeting with Pope Francis at the Vatican on Thursday morning.
“Leo explained that he wanted to discuss a subject they both have very much at heart: protecting the environment and climate change,” a source tells PEOPLE.

DiCaprio, 41, arrived at the Vatican at 11:15 a.m. local time and was accompanied by his father, George DiCaprio, and Milutin Gatsby, global fundraising chair for the actor’s namesake charity, the Leonardo DiCaprio Foundation.

During the 15-minute meeting, the actor presented the pontiff with a check from his environmental philanthropy for him to use for charity works “close to your heart,” reports the Associated Press.
“Your Holiness, thank you for granting me this private audience with you,” DiCaprio said in Italian as he kissed the Pope’s ring before leaving, according to the Associated Press.

This meeting is the latest stop on the actor’s environmental advocacy tour. DiCaprio was recently honored for his philanthropic efforts at the Economic Forum in Davos, where he donated another $15 million to environmental projects.

He also announced new partnerships with different environmental groups that focus on conservation and sustainability around the world.