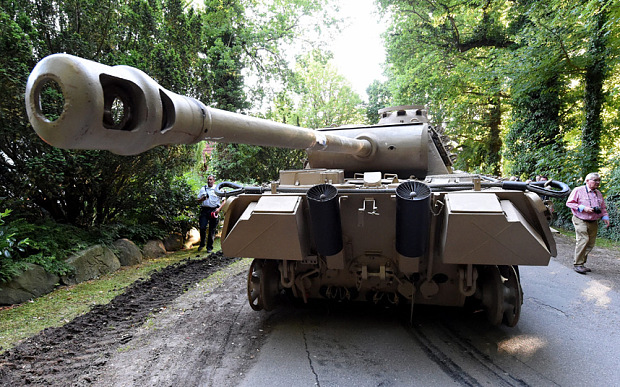 (The Telegraph) German soldiers grappled for nine hours with an unusual task: trying to remove a Second World War tank found in the cellar of a villa.

Almost 20 soldiers struggled to remove the tank from a villa on Thursday in a wealthy suburb of Kiel in northern Germany, after police searching the property discovered the tank, a torpedo, an anti-aircraft gun and other weapons in the cellar on Wednesday.

Police raided the home in the town of Heikendorf under instructions from prosecutors, who suspected that the villa's 78-year-old owner held the weaponry illegally under a law controlling the possession of instruments of war.

The army was called in to try to remove the 1943-vintage Panther tank, and struggled for nine hours to tow it out using two modern recovery tanks designed to haul damaged battle tanks off the field.

The soldiers ended up having to build their own wooden ramp in order to free to tank.

Ulrich Burchardi, an army spokesman, described the difficult task of removing the tank without damaging the house as “precision work.” 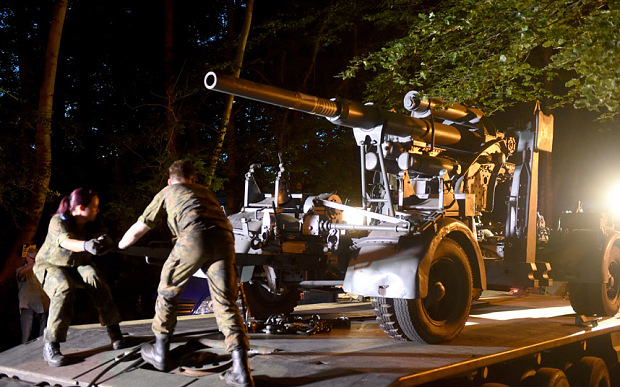 Prosecutors in Kiel were alerted to the existence of the weapons by the authorities in Berlin, who had previously searched the villa for stolen Nazi art around a month earlier, national newspaper Süddeutsche Zeitung reported.

But Peter Gramsch, lawyer for the villa’s owner, claimed that the tank and the anti-aircraft gun could no longer fire their weapons and were therefore not breaking any law.

He told the newspaper there was even a note from the responsible district office from 2005 stating that the tank had lost its weapons capability.

Mr Gramsch now wants to take legal action against the seizure and also for compensation for his client.

“I assume that the tank was damaged in the process,“ he said... (continued)