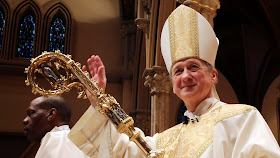 Therefore, what appears to be a grave violation of Canon 844 has been committed. Present at the Mass was Chicago's new archbishop Blase Cupich.

In addition to the violation of canon law, the question is being asked: Was a sacrilege committed on the new archbishop's watch?

According to canon law, since the governor is a non-Catholic, he is unable to be given Holy Communion unless a number of conditions are all met:
As for the matter of sacrilege, it is understood to mean to treat that which is holy in an unholy manner. Unfaithful reception or administering of Holy Communion is a sacrilege. So a number of questions arise:

Did the archdiocese of Chicago, while extending an invitation to the governor to attend the funeral, perform its minimal duty to prevent any sacrilege by informing the governor's office that Holy Communion is reserved for Catholics in the state of grace?

Was political favor shown to the governor in the dismissing of canon law?

The USCCB has issued a clear directive on the matter of non-Catholics receiving Holy Communion. The directive states in part, "Because Catholics believe that the celebration of the Eucharist is a sign of the reality of the oneness of faith, life, and worship, members of those churches with whom we are not yet fully united are ordinarily not admitted to Holy Communion" (emphasis added).

So the question remains: Is Archbishop Cupich disregarding the directives of his brother bishops?

In November 2014, newly appointed Archbishop Cupich created a controversy in the Catholic world when he was interviewed by CBS's Face the Nation. Cupich was asked point blank if he would give Holy Communion to pro-abortion Catholic politicians. He ducked the question by saying he didn't want the issue to come up at the communion rail.


Cupich's appointment was disappointing to many faithful Catholics owing to his more politically progressive stands on issues like illegal immigration and global warming. In a move that stunned many faithful Catholics in Spokane, Washington, he forbade any of his priests from participating in pro-life prayer rallies, especially those in front of abortion chambers.

This newest scandal of not properly safeguarding the Holy Eucharist from sacrilege is only heightening the concern of faithful Catholics.