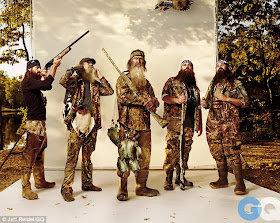 By Will Payne In West Monroe, Louisiana

And the deeply religious outdoorsman stood by his incendiary statements – which saw him call homosexuality a sin and led to his suspension from the hit reality show by network bosses at A&E.

During Sunday’s speech, he defended himself, saying he was simply quoting from the Bible and even went so far as to say Jesus could save gay people.

‘I love all men and women. I am a lover of humanity, not a hater,’ he added.

The 67-year-old has been slammed by gay rights groups since his interview in January’s issue of GQ magazine was made public last week.

He was quoted as saying: 'It seems like, to me, a vagina - as a man - would be more desirable than a man’s anus.

'That’s just me. I’m just thinking: There’s more there! She’s got more to offer. I mean, come on, dudes! You know what I’m saying? But hey, sin: It’s not logical, my man. It’s just not logical.'

But despite the criticism Robertson has faced, his family and local community have come to his defense and stood firmly behind him.

Yesterday Entertainment Weekly claimed that despite his suspension, Robertson will be back on the hugely popular show – which regularly pulls in 12 million viewers – when filming recommences in January.

They quoted a source saying: ‘The network also hopes the media and fan furor will cool down over the holidays and that tensions over shooting future episodes can then be resolved. There’s no negotiation to have; we’re doing the show.’

That will come as welcome news to the people of West Monroe and much of the country, who have leaped to Robertson’s defense and said he has the right to speak his mind...

Yesterday it was revealed one company, Cracker Barrel had dropped the Louisiana family. But after threats of a boycott they almost immediately reversed their decision, releasing a statement, saying:

‘You told us we made a mistake. And, you weren’t shy about it. You wrote, you called and you took to social media to express your thoughts and feelings. You flat out told us we were wrong. Today, we are putting all our Duck Dynasty products back in our stores. And, we apologize for offending you...’