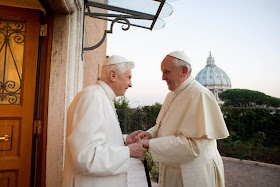 Vatican City (AFP) - Pope Francis visited his predecessor Benedict XVI on Monday for an informal Christmas greeting, as the Argentine pontiff prepares to celebrate his first Christmas as leader of the world's Roman Catholics.


Francis met with the 86-year-old Benedict in a former monastery building on a hill inside the Vatican City walls where the pope emeritus has taken up residence following his historic resignation earlier this year.

The two men could be seen praying side by side in a chapel inside the residence and chatting amicably on white sofas with a Christmas garland in front of them in photographs released by the Vatican press service.

Both were dressed in the white cassocks used by popes. 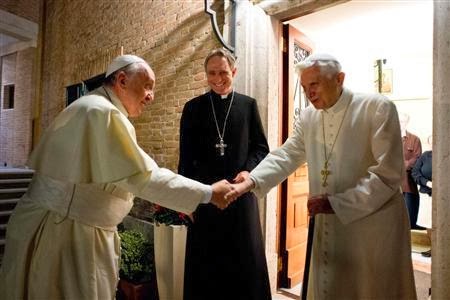 Francis came to "give his best wishes for the Christmas celebrations", the Vatican said in a statement.
The 77-year-old pope earlier on Monday compared the Catholic Church to an expectant mother during a homily at one of his daily masses in the residence where he has been staying since his election by fellow cardinals in March.

"Like the Virgin Mary, the Church this week is expecting a birth," Francis said.

"Is there space for the Lord or is there space only for parties, shopping and making noise?" he asked.
The Christmas festivities begin with the unveiling on St Peter's Square of a traditional Nativity scene named in honour of Latin America's first ever pontiff at 1530 GMT.

Francis is expected to watch the ceremony from the window of the Apostolic Palace overlooking the square and light a candle for peace.

Then from 2030 GMT the Argentine will celebrate the solemn Christmas Vigil mass in St Peter's Basilica.

On Wednesday, Francis delivers the "Urbi et Orbi" ("To the City and the World") blessing at 1130 GMT on St Peter's Square -- where he first appeared after his momentous election by fellow cardinals on March 13.

Popes often use their "Urbi et Orbi" blessings to announce specific prayers, for instance, for the victims of conflicts or for global economic justice.