Stained Glass and the Book of Revelation 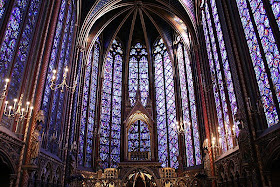 Most Catholics are unaware of how our traditional church buildings are based on designs given by God himself. Designs that stretch all the way back to Mount Sinai when God set forth the design for the sanctuary in the desert and the tent of meeting. Many of the fundamental aspects of our church layouts still follow that plan and the stone version of it that became the Jewish Temple in Jerusalem. Our traditional church buildings also have numerous references to the Book of Revelation and the Book of Hebrews, both of which describe the heavenly liturgy and heaven itself.
There is not time to develop these roots at length in this post today, though I hope to do so in a series of future posts.
Sadly in recent decades there was a casting off of these biblical roots in favor of a “meeting house” approach to church design. No longer was the thinking that our churches should reflect heavenly realities, teach the faith,  and follow biblical plans. Rather the thinking was that the Church simply provided a space for the people to meet and conduct various liturgies.
In some cases the liturgical space came to be considered “fungible” in that it could be reconfigured to suit various needs: Mass today, concert tomorrow, spaghetti dinner on Wednesday. This thinking began to be set forth as early as the 1950s. Pews were often replaced by chairs which could be moved to suit various functions. And even in parishes which did not go so far as to allow spaghetti dinners in the nave, (mine did in the 1970s), the notion of a church as essentially a meeting space prevailed... (continued)
Read More
Vincenzo at 1:32 PM
Share