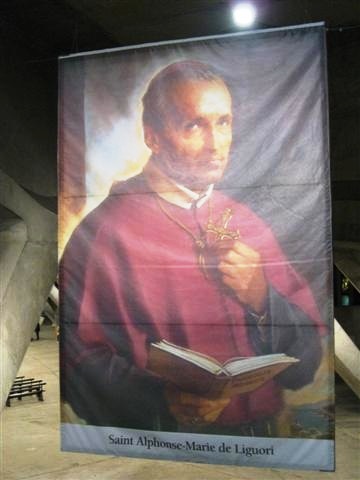 That’s one of the pictures I took of the gargantuan images of the saints in the underground basilica of Saint Pius X in Lourdes when I was a chaplain there for a couple of years. Remember, he was a civil lawyer and a canon lawyer and a moral theologian and a saint. Probably he wants to do what the Church wants. We give him the benefit of any doubt!

In our times, the seal of confession is quite absolute, including indirect revelation of what went on in the confessional. If you were to begin a true imprecatory exorcism during confession, do you not think that the exercise of this sacrament would be interrupted or ended for the sake of a sacramental? The devil will have won, even in the confessional, or outside of it if the possessed person goes into antics and bursts out of the confessional because you have started an exorcism in the wrong place at the wrong time. That poor person will have no one to care for them, to hold them down if necessary, so that they don’t hurt themselves.

Some insist that Saint Alphonsus recommended an exorcism of certain penitents during confession. I’d like to see that passage, and I’d like to see, if that is true, if he is speaking of an imprecatory or “merely” deprecatory exorcism. I would assume the latter if there is no distinction. If it is “merely” the latter – with no commands being given to the devil, as at the end of the Lord’s Prayer: “but deliver us from the Evil One”, a request to our Lord – then go for it! But don’t make an imprecatory direct command to Satan during confession.

The sacrament of confession is infinitely more valuable to a soul than the sacramental of exorcism. Get the confession done, and then, if need be, move on to the exorcism.

Protecting the seal of confession does not admit of loopholes and excuses. It’s an absolute.