by Michael Clancy
The Arizona Republic 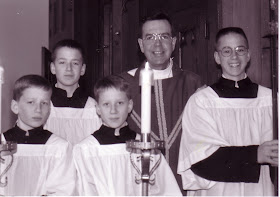 Girls no longer will be allowed as altar servers during Mass at the cathedral of the Roman Catholic Diocese of Phoenix, SS. Simon and Jude.

The Rev. John Lankeit, rector of the cathedral, said he made the decision in hopes of promoting the priesthood for males and other religious vocations, such as becoming a nun, for females...

"It is a shame on how the church continues to abuse the females," said Bob Lutz of Phoenix, a Catholic with three grown daughters. "Church attendance is shrinking now, and this adds more fuel to the fire on how females are treated as second-class citizens."

"I believe Mary Magdalene set the example for women to be altar servers. I am so sorry to hear of this going backwards," she said, adding that she still loves her church, "warts and all."
But Michael Clancy, who heads the diocesan men's group, said girls never were supposed to be allowed to serve, based on his understanding of the rules of the Mass...