Finding this huge snake skin today, on the feast of the Immaculate Heart of Mary, reminds me of my life and times as an exorcist here and there around the world. It comes to mind to do a series on exorcism tips for the new exorcists coming on the scene in America and right around the world. 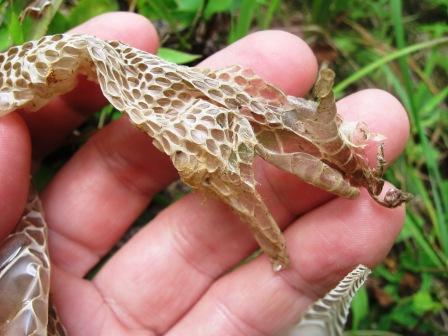 Mind you, it’s NOT that I’m anything special at all. It’s just that I’ve had quite a lot of varied experience, both in the training of exorcists and in doing exorcisms. Experience is always useful. Always. In this series, I won’t conjecture anything. I’ll be extremely strict about the interpretation of restrictive law about exorcism, keeping you within the parameters of obedience to Holy Mother Church. 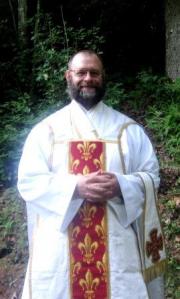 Here’s the first tip, taking a hint from the great letter of Saint Judas (or Jude) in the New Testament (see 1,9): Saint Michael the Archangel would not rebuke the devil, but counted on the Lord to do this for him.

Never, don’t ever take it upon yourself to revile Satan. Humbly ask Christ our God, the Son of the Immaculate Conception to do this for you. If you do that, Satan will jump right out of his skin and depart immediately. He’s nothing compared to the Son of the Immaculate Conception. Asking is “deprecation.” Everyone is free to do that. We do that at the end of the Lord’s prayer: “Deliver us from the Evil One.”

If you are an exorcist, expressly mandated by your local Ordinary to do an exorcism or to have the ministry in an ongoing manner, and you are called upon to pronounce an imprecatory exorcism , such as “Begone, Satan!” – imprecation being a direct command – never, don’t ever forget that you are doing this in the name of Christ our God, the Son of the Immaculate Conception. If you, for a second forget this, Satan will have his way with you. I’ve seen this countless times as an exorcist.

In any case, recite the prayer to Saint Michael after every Mass. These are not suppressed for the Extraordinary Form of 1962. That suppression came a couple of years later and would not affect the provisions of Summorum Pontificum for the 1962 Mass.

Even in regard to the Ordinary Form, I think both Blessed John Paul II and Pope Benedict have asked that the Prayer to Saint Michael continue to be recited after every Mass.... (continued)