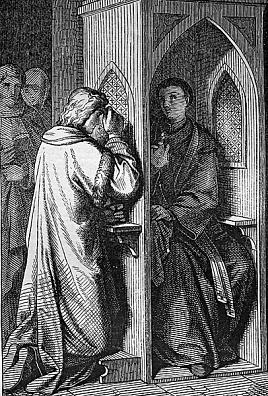 One of the greatest Dominican exorcists, a Consultor for I don’t know how many dicasteries of the Roman Curia, a brilliant professor and theologian – who once gave me excellent, incisive advice for a thesis I was thinking about writing at the time with the then Secretary of the Pontifical Biblical Commission, and now Cardinal, A.V. – told me that he once neglected to say terce on the day he was to do an exorcism. He said that upon beginning the exorcism, the devil immediately taunted him about this. His reaction was to, then and then, drop to his knees and go to confession to the priest with him. All went well after that.

On another occasion – and this goes back some decades in Rome – there was a young priest who could do nothing except scoff at even the idea of exorcism. Being invited to go to an exorcism, he went, only this time to make a show of his scoffing, crossing his arms, shrugging his shoulders, scowling his disapproval, almost mocking the goings on, certainly not praying in his contempt. As the exorcism became intense, the devil turned to this unbelieving sorry excuse for a priest, and started describing the time that the priest had had the night before in a hotel room with a prostitute, naming the hotel, the works. This priest ran out of the room and kept on running, hopefully right to a confessional... (continued)