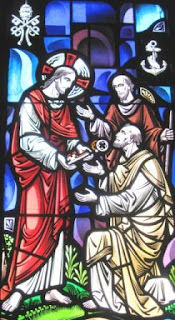 Acts 19,13-17 — Then some itinerant Jewish exorcists tried to invoke the name of the Lord Jesus over those with evil spirits, saying, “I adjure you by the Jesus whom Paul preaches.” When the seven sons of Sceva, a Jewish high priest, tried to do this, the evil spirit said to them in reply, “Jesus I recognize, Paul I know, but who are you?” The person with the evil spirit then sprang at them and subdued them all. He so overpowered them that they fled naked and wounded from that house. When this became known to all the Jews and Greeks who lived in Ephesus, fear fell upon them all, and the name of the Lord Jesus was held in great esteem. [nab]

That’s in Scripture, right? Yes. That’s an inspired account, right? Yes. Surely the Holy Spirit is instructing us about how Satan will always act when one lacks a mandate to exorcize, right? Wrong, wrong, wrong!

Makes rules of conduct for yourself, such as obeying the Church no matter. However, don’t make rules for Satan. Did he not say rather emphatically: “Non serviam! I will not serve!” ? Satan may very well not react this way every time. In fact, he may want one without authority over himself, one who is not an exorcist expressly mandated by the local Ordinary, to think he has such power. This creates a culture of seeming legitimacy of disobedience, whereby people rejoice not that their names are written in heaven, but that they have “power” over demons. Satan is better at arrogance than we are. He will win, every time, if this is the kind of thing people are doing. And many, many souls fall into this trap. Time and again. Belligerently... (continued...)