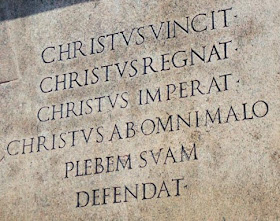 From time to time you’ll see the terms “major” and “minor” thrown about by major or minor ecclesiastics regarding exorcism. There has been a great deal of confusion about this for the past 150 years or so. Clarity is a good thing when dealing with Satan. Some don’t want clarity because they want to break the law of the Church and just do what they want. This is common in the field of exorcism. Disobedience is exactly what is not needed for exorcism, but this is where one will find plenty of disobedience, real belligerence.

Those who want to muddy the waters almost always want to do true exorcisms even though they have no permission from the local Ordinary, even though they are not priests. These disobedient souls insist that only a “major”, “public”, “ancient”, “lengthy”, “printed and therefore official”, “Latin as opposed to ‘mere’ vernacular”, “‘serious’ as opposed to what happens in the prayer group” kind of exorcism is what is forbidden to them. They say that they can give direct commands to Satan, holding their hands over all and sundry, as long as, in their opinion, what they are doing is “minor”, “private”, “modern, even of their own composition”, “short”, “oral or at least unofficial in that it has not been put through a process of approval”, “vernacular”, “not so serious, just in a prayer group” kind of thing. This is ludicrous and plays right into the hands of Satan... (continued...)