Update: Michael Voris - No Bull In Madrid Number 1 -- the video of Mr. Voris' World Youth Day speech at this link should play now.


By Carol at The Tenth Crusade: 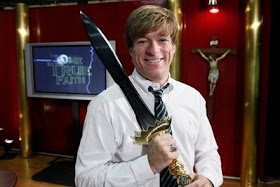 The Catholic News Agency has fallen to a new low. They're now trying to dig up dirt to run smear campaigns on Catholics who have had enough of the counterfeit church they've been raising in the US for the last forty years.

If you read the thread of comments - and I would encourage you to leave one there - it didn't exactly have the outcome they had hoped for....

The concept of confronting theologians with errors so that Catholic children will be taught the authentic faith and led to resist temptation is some kind of vice to them. Trying to take a person down who is protecting children from error is virtue.

This is the same thing the Bernadin crowd has been doing to us for decades. Asking to have our religion taught to us and our children results in character assassinations and thuggery.

Knock yourselves out. We're all going to keep going. Our children deserve to have their religion taught them them and by the Christ, they will. Go bleep yourselves.

And you might be surprised, considering his past criticism of Michael Voris, to read the following from Mark Shea:

"....personally, I don’t think any of this stuff is a big deal and don’t think there is anything sinister at work here. I disagree with Voris on certain points and think that his My-Way-or-the-Highway presentation leaves much to be desired, but I don’t for a moment think him a dishonest man. As somebody who has an anti-charism of organization and who is cocooned in administrative chaos whenever I have to organize anything more complex than a trip to the zoo with my grand-daughter, I can easily believe that Voris simply lost track of whatever paperwork you have to do to make a non-profit stay on the books of the State of Michigan. If you find that incredible, then you’ve never worked in an organization founded by a guy with a specific charism (say, speaking and making videos) who delegates all the administrative stuff to somebody else and assumes it’s all being taken care of. I’ve seen such organizations (although “organization” is a strong word in such situations) and the barely contained chaos they often foster. Indeed, a standing joke I’ve loved for years is, “I don’t believe in organized religion. I’m Catholic.” It’s really pretty common with little non-profits and signifies nothing beyond, “We’re a young organization and we’re not quite sure what we are doing bureaucratically.”

For that reason, I’m also quite certain that, once Voris is back from Europe and they get caught up on the paperwork, Real Catholic TV will do whatever it is you do to make sure that their donors get the refund or tax exemption or whatever it is that is supposed to happen to make it all right. I don’t envy them the bureaucratic headache they face, and I don’t for one moment think they were trying to do anything wrong. It looks to me like a blunder, nothing more. So I don’t think there’s much of a story here beyond “Paperwork gets messed up.” I hope that it will give them a bit more empathy with the bureaucrats in chanceries they often denounce for similar disorganized blundering, but I don’t plan on losing sleep over this screwup or going all high dudgeony on them. Voris is a better man than me in that he has at least mastered the mysterious process of founding a non-profit, something that still leaves me in slack-jawed confusion and bewilderment. Give him a break.

Similarly, I just don’t see the big issue with Simon Rafe, whose background is in English, Creative Writing, and that whole side of the artistic world using his creative gifts to write fan fiction or create a D&D game with “adult themes.” One routinely reads novels, plays and short stories by great Catholic writers (Chaucer, Shakespeare, O’Connor, or such great science fiction writers as Michael Flynn and Gene Wolfe) in which all sorts of “adult situations” are portrayed and no mature Catholic would object. The Bard alone is full of rape, incest, adultery, cannibalism, sorcery and murder, not to mention routine bawdiness that has gotten laughs for centuries..."