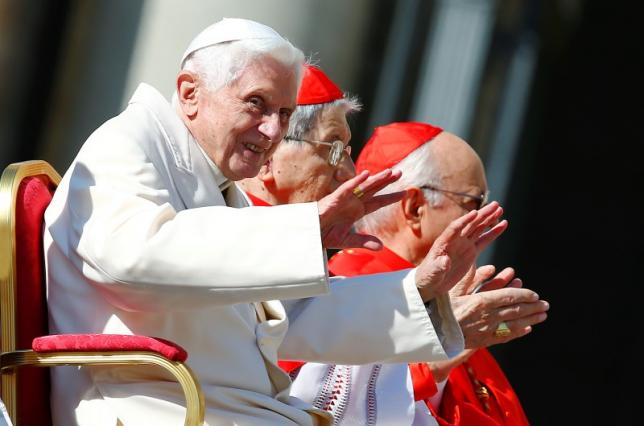 (Reuters) Former Pope Benedict says in his memoirs that no-one pressured him to resign but alleges that a "gay lobby" in the Vatican had tried to influence decisions, a leading Italian newspaper reported on Friday.

The book, called "The Last Conversations", is the first time in history that a former pope judges his own pontificate after it is over. It is due to be published on Sept. 9.

Citing health reasons, Benedict in 2013 became the first pope in six centuries to resign. He promised to remain "hidden to the world" and has been living in a former convent in the Vatican gardens.

Italy's Corriere della Sera daily, which has acquired the Italian newspaper rights for excerpts and has access to the book, ran a long article on Friday summarizing its key points.

In the book, Benedict says that he came to know of the presence of a "gay lobby" made up of four or five people who were seeking to influence Vatican decisions. The article says Benedict says he managed to "break up this power group".

Benedict resigned following a turbulent papacy that included the so-call "Vatileaks" case, in which his butler leaked some of his personal letters and other documents that alleged corruption and a power struggle in the Vatican.

Italian media at the time reported that a faction of prelates who wanted to discredit Benedict and pressure him to resign was behind the leaks. (continued..)