A moment with St. Maria Goretti in Philadelphia 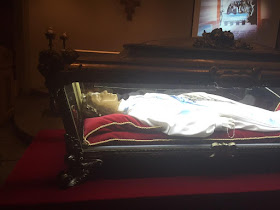 (Catholic News Agency) Pilgrims roaming the streets of downtown Philadelphia in the days before Pope Francis’ arrival had the opportunity to venerate one of the Church’s youngest canonized saints.

The relics of St. Maria Goretti – on tour throughout the U.S. – spent a few days at St. John the Evangelist Church.

Gathered from across the globe for the World Meeting of Families, pilgrims stood patiently in lines that stretched back several city blocks, waiting for a few moments to pray in front of the young saint’s body.

The story of St. Maria Goretti is a beautiful witness of forgiveness. At age 11, she was approached by neighboring farmhand Alessandro Serenelli, who attempted to seduce her. She rejected his advances, and he tried to rape her. When she continued to fight back, he stabbed her 14 times, killing her. As she died, she told him that she forgave him and hoped that he would one day be in heaven with her.
Eventually, Serenelli underwent a powerful conversion and became a lay brother. There have been calls of his canonization cause to be opened.