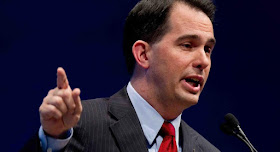 By Adam B. Lerner

(Politico) Scott Walker stumbled over his own prior comments Wednesday, saying that when he called on the Boy Scouts to reinstate a ban on gay leaders because it “protected children,” he meant the ban protected them from media scrutiny.

“The protection was not a physical protection,” Walker said Wednesday at an event in South Carolina, according to The New York Times. Rather, the Wisconsin governor continued, he was referring to “protecting them from being involved in the very thing you’re talking about right now, the political and media discussion about it, instead of just focusing on what Scouts is about, which is about camping and citizenship and things of that nature.”

The Wisconsin Republican added that, ultimately, whether or not to reinstate the ban is “up to the Boy Scouts.”

The comments came after the Independent Journal Review, in a report Tuesday, quoted Walker as saying he supported the Boy Scouts’ previous membership policy “because it protected children and advanced Scout values...” (continued)