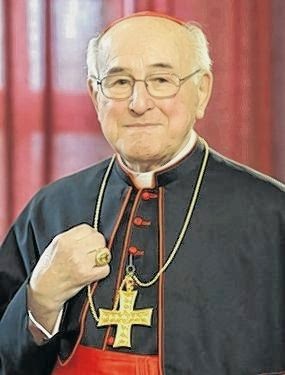 (Newsmax) A German cardinal has lambasted fellow church leaders who support admitting divorced and civilly remarried Catholics to Holy Communion, calling them heretics who are putting the unity of the Catholic Church at risk.

Cardinal Walter Brandmüller, a former head of the Vatican’s commission for historical sciences, told LifeSite News Tuesday that those who support such a change are “irresponsible” and “in contradiction to the teaching of the church.”

This is the first time that a cardinal has openly voiced what a number of senior figures have said privately that those promoting such admission are teaching heresy and are no longer Catholic.

Brandmüller was responding to a proposal, put forward last year by fellow German Cardinal Walter Kasper, for remarried Catholic divorcees to receive Holy Communion after a period of penance.

The church has always forbidden such a practice on the grounds it would undermine Jesus explicit teaching that marriage is indissoluble, and that a person who divorces and “remarries” commits adultery.

The church teaches that divorced and civilly remarried Catholics can only be admitted to communion if they have obtained an annulment of their first, sacramental marriages, or abstain from sexual relations with their new partners and live as "brother and sister."

Kasper’s proposal, the subject of a church synod on the family, has therefore caused much hand-wringing in the church, with a number of cardinals publicly at loggerheads over the issue.

The church’s pastoral practice “cannot stand in opposition to binding doctrine nor simply ignore it,” Brandmüller said. “A change of the teaching, of the dogma, is unthinkable. Who nevertheless consciously does it, or insistently demands it, is a heretic — even if he wears the Roman purple...” (continued)