From The Digital Hairshirt:

Hat tip to the erudite Fr. David Carter for posting this.

Even if you are not Catholic, this is some mighty fine videography.  I especially like the drone shots.  Ascension Press did a great job with this and I am looking forward to checking out more of their videos.


Do me a favor - someone go tell Fr. John Moneypenny to post this to the OC Vocations page/FB wall.

SAN FRANCISCO (CBS SF) — A Bay Area church is now under fire over a controversial new policy saying only boys can be altar servers.

The new practice is making waves at the century old church Star of the Sea. Since the ’70s, they’ve used altar girls during masses.

The well-known Richmond District church also has a school serving about 230 kids. When the new priest banned girls from being altar servers, it generated outrage among parents and parishioners alike. The priest admits some parishioners even left the church.

Star of the Sea School parent Tara Widmer agrees. “They’re definitely taking a step in the wrong direction,” she said.

Father Joseph Illo took over five months ago and decided to train only boys to be altar servers.

He said he has no choice but to exclude girls because the future of the church is at stake.

“The specifics of serving at the altar is a priestly function,” Illo said. “And the Catholic church does not ordain women...” (continued)

From In Caelo et in Terra:


An interesting interview in Christ & Welt, a weekly supplement to Die Zeit in Germany, with Archbishop Georg Gänswein yesterday. It sheds some interesting lights on recent developments in the Vatican, such as Pope Francis’ Christmas talk to the Curia, the Pope’s relationship with the media, the Synod and also retired Pope Benedict XVI and some personal touches. Worth a read:

Does Benedict sometimes speak about his retirement? Is he relieved?

He is at peace with himself and convinced that the decision was right and necessary. It was a decision of conscience that was well prayed and suffered over, and in that man stands alone before God.

You struggled with Benedict’s historical retirement in February of 2013. How do you look back on this step now?

It is true that the decision was difficult for me. It was not easy to accept it internally. I struggled to cope. The fight is now long since over.

You swore to be loyal to Benedict to the death. Does that also mean that you’ll remain at his side, and also in the Vatican?

On the day of his election as Pope I promised to help him in vita et in morte. Of course I did not take a retirement into account at that time. But the promise is still true and remains valid... (continued)

Pope Francis says he wants all annulments to be free

Pope Francis on Friday (Jan. 23) warned the Vatican’s top marriage judges that they should not “lock the salvation of persons within the straits of legalism” and indicated he wants the church to no longer charge for the sometimes onerous and expensive annulment process.

“This is a point I want to emphasize: the sacraments are free,” Francis told jurists of the Roman Rota, the church’s final court of appeals for annulments.

“The sacraments give us grace,” he said. “And a marriage proceeding” — like an annulment — “touches on the sacrament of marriage...” (continued) 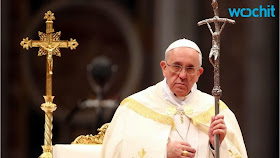 VATICAN CITY (AP) — Pope Francis is warning his new cardinals to keep the partying to a minimum — and keep their egos in check — when they are formally elevated at a Vatican ceremony next month.

In a letter written to the 20 new princes of the church published Friday in the Vatican newspaper L'Osservatore Romano, Francis warned the cardinals to avoid the type of ostentatious festivities that "stun worse than grappa on an empty stomach."

Traditionally, new cardinals are feted with lavish parties, often funded by well-meaning parishioners, in Rome after the ceremony where they receive their red hats. Francis, known for his personal simplicity and disdain for anything fancy, said it was perfectly fine to celebrate but urged his new cardinals to accept a party "with humility..." (continued)

Pope Francis Confirms He Will Visit DC, NYC and Philly

(NBC News) Pope Francis' confirmed Monday that his trip to the United States this fall will include stops in Washington and New York City, in addition to the previously announced visit to Philadelphia.

The pontiff told reporters he wishes he could enter the U.S. through the Mexican border "as a sign of brotherhood and of help to the immigrants," but will probably just fly directly to the East Coast.

"You know that [to] go to Mexico without going to visit the Madonna [of Guadalupe] would be a drama. A war could break out," he said, laughing. "I think there will only be those three cities. Later there will be time to go to Mexico."

Details of his itinerary are in the early-planning stages, but organizers are already talking about appearances at the White House, the United Nations and Ground Zero, and even a Mass at Madison Square Garden.

One thing that is not in question: American Catholics can't wait to play host to the hugely popular people's pontiff.

"You can't go to anything connected to the Archdiocese without people asking if Pope Francis is coming," Joseph Zwilling, a spokesman for the Archdiocese of New York, told NBC News on Monday.

Zwilling said he was in New York for Pope John Paul II's second visit in 1995 and for Pope Benedict XVI's trip in 2008 but thinks "a visit by Pope Francis is going to easily surpass either of those two events."

"Pope Francis is the leading global voice on issues of social justice and income inequality, and New Yorkers from all backgrounds will be tremendously humbled and honored to hear his message right here," de Blasio said in a statment... (continued)

Pope says Catholics don't need to be 'like rabbits' 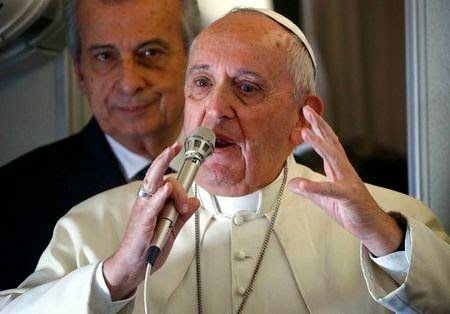 ABOARD THE PAPAL PLANE (Reuters) - Catholics should not feel they have to breed "like rabbits" because of the Church's ban on contraception, Pope Francis said on Monday, suggesting approved natural family planning methods..

"Some think, excuse me if I use the word, that in order to be good Catholics, we have to be like rabbits - but no," he said, adding the Church promoted "responsible parenthood".

He mentioned a woman he recently met who already had seven children by caesarean sections and put her life at risk by becoming pregnant again. He said he chided her for "tempting God" and added: "That was an irresponsibility."

...A while back I wrote about the excellent and pious practice of teaching children to pray for their future spouse.  Here is a lovely song that I first heard over ten years ago when I attended the “Down From the Mountain” concert, which was the tour associated with the “O Brother Where Art Thou” soundtrack.  I splurged and bought front-row center seats at the Paramount Theatre in Denver.  Hands down, best show I’ve ever seen.  The only thing missing was the Cox Family, who were on the bill, but Willard Cox had just been in a serious car accident.

Anyway, this song by Gillian Welch and David Rawlings is about the anticipation of spousal love, and can also be heard Christologically, with the imagery of a boat (the Church), a guiding star (the star of Bethlehem), the wind rushing over the waters (creation and baptism), and the outstretched arms inviting embrace (Our Lord crucified). Hurry and take me straight into the arms… indeed.

I’ll build a boat, steady and true
As soon as it’s done
I’m going to sail along in a dream
Of my dear someone 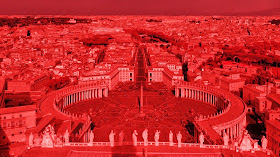 A guilty conscience demands confession. So what does it do? it goes to the Cathedral of the Confession of St. Peter, and makes a gigantic public confession.

Unable to "get" absolution, it accepts that public approval is a kind of absolution. But it never satisfies.

A guilty conscience is a terrible and merciless punisher ... revealing, rather than concealing.

ST. PAUL, Minn. (AP) — The Roman Catholic Archdiocese of St. Paul and Minneapolis filed for bankruptcy protection on Friday, saying it's the best way for the church to get as many resources as possible to victims of clergy sexual abuse.

"We're doing the right thing," the Rev. Charles Lachowitzer told The Associated Press in an interview in advance of Friday's filing in U.S. Bankruptcy Court. "This decision reflects the end of a process of putting victims first."

The archdiocese is the 12th U.S. diocese to seek bankruptcy protection in the face of sex abuse claims. Church leaders have said for months that bankruptcy was an option, as the archdiocese faces the potential for dozens of lawsuits by victims of clergy sex abuse. Those lawsuits would be put on hold while the bankruptcy case is pending. 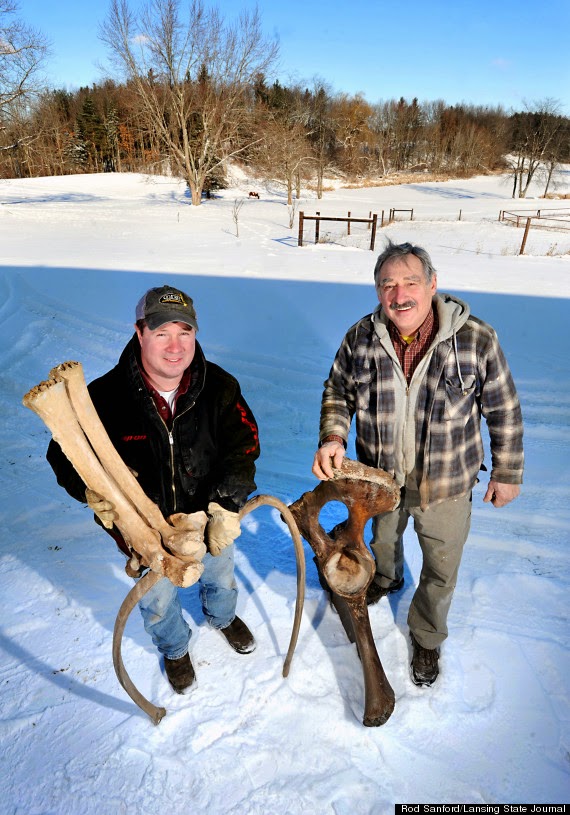 (The Huffington Post) You never know what's lying just beneath the surface in your own yard.

Most people find some old coins or a rusty bicycle chain. But two men in Michigan hit the jackpot when they discovered the remains of a massive Ice Age mammal.

Contractor Daniel LaPoint Jr. was working in Eric Witzke's Bellevue, Mich., yard when he noticed a giant rib sticking out of the ground, according to the Lansing State Journal. Over four days in November, the two worked together to pull 42 bones out of the ground..

I am thinking today of that beautiful land
We shall reach when the sun goeth down;
When through wonderful grace by my Savior I stand,
Will there be any stars in my crown?

In the strength of the Lord let me labor and pray,
Let me watch as a winner of souls;
That bright stars may be mine in that glorious day,
When His praise like the sea-billow rolls.

Oh, what joy it will be when His face I behold,
Living gems at His feet to lay down;
It would sweeten my bliss in the city of gold,
Should there be any stars in my crown.