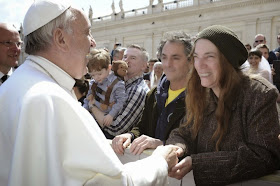 (International Business Times) The Holy See has announced that Patti Smith will be among the artists set to perform live in front of bishops and cardinals at the traditional Vatican Christmas concert in December.

The US singer who once sang: "Jesus died for somebody's sins -- but not mine," was expressly invited by Pope Francis, Italian newspaper Il Corriere della Sera reported.

The two famously met and shook hands at St Peter's Square on the sidelines of a weekly general audience in April last year.

The concert will be held at Rome's Auditorium Conciliazione, a few metres from the Vatican, on December 13, and is to be broadcast live on television.

The announcement comes as another Catholic association has been trying to prevent the same singer from performing at the iconic Basilica of San Giovanni Maggiore in Naples on December 9.

The Portosalvo committee asked Naples Archbishop Crescenzio Sepe to block what they say is a "blasphemous" event.

Their chances of success, however, have been dramatically reduced after the pontiff placed Smith at the top of the list of stars for the Vatican Christmas concert.

Among other performers that will take the stage for the 22nd edition of the Concerto di Natale are house music DJ Bob Sinclar and Italian 'singing nun' Sister Cristina Scuccia.