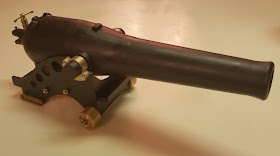 It may look like a toy but make no mistake, this cannon fires steel ball bearings using real gunpowder.

(Make:) Back in the day (the Civil War) naval vessels were outfitted with state of the art Dahlgren guns (nicknamed Soda Bottles from their distinctive shape), which could lob a shell close to 2 miles in distance. The North used to heat those shells until they were red hot and fired them into the sides of Confederate ships, which would set them ablaze. 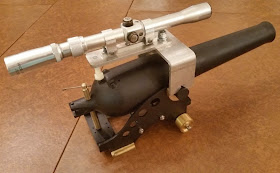 Scope it out- Sighting in the cannon is done using a custom-made scope that attaches to the barrel. Is the scope that useful?


As cool as cannons are, owning one is incredibly expensive and ammo is tough to find, however making one at 1/9th the scale is a lot cheaper provided you have the tools. Imgur user [Jefenry] designed his Dahlgren cannon using 4130 seamless alloy stainless steel with a 1-inch bore. The barrel fits snugly into his steel carriage with brass wheels, which was laser cut for an exact fit. Elevation is adjusted using a simple screw and sighting in is accomplished with a detachable scope... (continued)