From the Eponymous Flower: 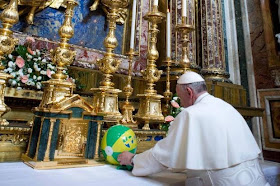 Here's the Report from News.va:


After his arrival at Ciampino airport, the Holy Father chose to stop at the Basilica of Saint Mary Major to offer a brief prayer to the Blessed Virgin for World Youth Day.

Seeing the Pope as he entered the Basilica, a group of young people approached him and offered him a T-shirt and a ball. Pope Francis later offered the gifts to the Madonna.

This is one of the great churches of Christendom, and recalls a time when it snowed in the summer as a sign of Our Lady's favor.  It was commemorated by the command of St. Pius V in connection with Trent... (continued)