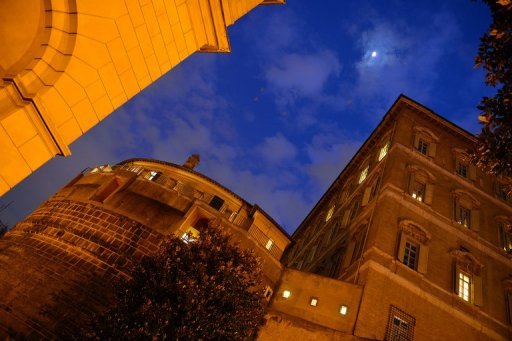 The headquarters of the Institute for Religious Works (IOR), the Vatican's bank, pictured on February 18, 2012 at The Vatican. The Vatican's "gay lobby" is back in the headlines after the alleged exposure of a homosexual prelate appointed by Pope Francis to a key position at the Vatican bank.

AFP - The Vatican's "gay lobby" was back in the headlines on Friday after the alleged exposure of a homosexual prelate appointed by Pope Francis to a key position at the Vatican bank.

The Italian weekly L'Espresso said prelate Battista Ricca had gay relationships during his time at the Vatican embassy of Montevideo in Uruguay as well as an affair with a Swiss guard which ultimately saw him sent back to Rome in disgrace.

Vatican expert for L'Espresso Sandro Magister said Ricca provided lodgings and a pay check for captain Patrick Haari in 1999 and was once left badly beaten after trawling notorious gay hangouts before his behaviour saw him transferred out of Montevideo in 2000.

An internal bid to protect him and cover up the scandal meant Francis apparently had no idea about Ricca's past before he appointed him as his personal representative at the scandal-hit bank this year.

Ricca went on to hold several prestigious positions in Rome, including the director of the Santa Martha residence where the pope lives.

Magister said the wiping of Ricca's records was an example of a "gay lobby" at work in the Vatican.

Vatican spokesman Frederico Lombardi brushed off the story as "not credible" but the magazine insisted the allegations were confirmed by primary sources. It said "numerous bishops, priests, religious and laity" in Uruguay had testified against Ricca.

Religious watchers said the leaks about Ricca's past may be an internal attempt to block the prelate from carrying out reforms.

In June, Francis admitted the existence of a "gay lobby" inside the Vatican's secretive administration, the Roman Curia.

"In the Curia, there are truly some saints, but there is also a current of corruption... There is talk of a 'gay lobby' and it's true, it exists," he was quoted as having said during an audience with CLAR (the Latin American and Caribbean Confederation of Religious Men and Women).

The admission followed Italian media reports in February which claimed that a secret report by cardinals investigating leaks from within the Vatican included allegations of corruption and blackmail attempts against gay clergymen, and on the other hand, favouritism based on gay relationships.

If the allegations are proven to be true, it would be a blow to Francis's attempts to clean up the scandal-hit Vatican.