“A Day Without Yesterday:” Fr. Georges Lemaitre & The Big Bang

...Contact was about radio astronomy and the SETI project – the Search for Extraterrestrial Intelligence. It wasn’t science fiction in the way “Star Trek” was science fiction. Contact was science AND fiction, a novel crafted with real science, and no one but Carl Sagan could have pulled it off. The sheer vastness of the Cosmos unfolded with crystal clarity in Sagan’s prose, a vastness the human mind can have difficulty fathoming. Anyone who thinks we are visited by aliens from other planets doesn’t understand the vastness of it all.

The central theme of Contact was the challenge astronomy poses to religion. In the story, SETI scientist Eleanor Arroway – a wonderful character portrayed in the film version by actress Jodie Foster – becomes the first radio astronomer to detect a signal emitting from another civilization. The signal came from a planet orbiting Vega, a star, not unlike our own, about 26 light years from Earth. The message of the book (and film) is clear: if another species like us exists, and we are ever to have contact, it will be in just this way – via radio waves moving through space at light  speed... 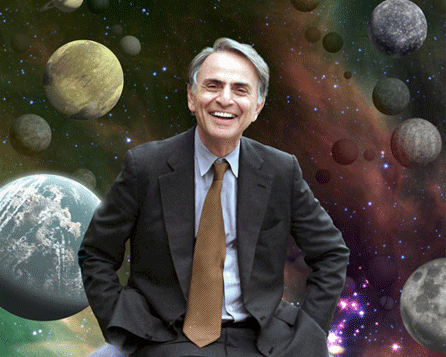 ...I wrote Carl Sagan a letter at Cornell.  I understood that Sagan was an atheist, but the central story line of Contact was the effect the discovery of life elsewhere might have on religion, especially on fundamentalist Protestant sects who seemed the most threatened by the discovery.

I thought Carl Sagan handled the controversy quite well, without judgments, and even with some respect for the religious figures among his characters. In my letter, I pointed out to Dr. Sagan that Catholicism, the largest denomination of Christians in America, would not necessarily share in the anxiety such a discovery would bring to some other faiths. I wrote that if our galactic neighbors were embodied souls, like us, then they would be in need of redemption in the same manner in which we have been redeemed.

Weeks later, when an envelope from Cornell University’s Department of Astronomy and Space Sciences arrived, I was so excited my heart was beating BILLions and BILLions of times! Carl Sagan was most gracious. He wrote that my comments were very meaningful to him, and he added, “You write in the spirit of Georges Lemaitre!”

I framed that letter and put it on my rectory office wall. I wanted everyone I knew to see that Carl Sagan compared me with Georges Lemaitre! I was profoundly moved. But no one I knew had a clue who Georges Lemaitre was. I must remedy that.  He was one of the enduring heroes of my life and priesthood. He still is!

FATHER OF THE BIG BANG

Georges Lemaitre died on June 20, 1966 when I was 13 years old. It was the year “Star Trek” debuted on network television and I was mesmerized by space and the prospect of space travel.  Georges Lemaitre was a Belgian scientist and mathematician, a pioneer  in astrophysics, and the originator of what became known in science as “The Big Bang” theory -which, by the way, is no longer considered in cosmology to be a theory.

But first and foremost, Father Lemaitre was a Catholic priest. He was ordained in 1923 after earning doctorates in mathematics and science.  Father Lemaitre studied Einstein’s celebrated general theory of relativity at Cambridge University, but was troubled by Einstein’s model of an always-existing, never changing universe. It was that model, widely accepted in science, that developed a wide chasm between science and the Judeo-Christian understanding of Creation. Einstein and others came to hold that The Universe had no beginning and no end, and therefore the word “Creation” could not apply.
Father Lemaitre saw problems with Einstein’s “Steady State” theory, and what Einstein called “The Cosmological Constant” in which he maintained that The Universe was relatively unchanging over time. From his chair in science at Catholic University of Louvain in Belgium from 1925 to 1931, Father Lemaitre put his formidable mind to work... (continued)