The Last Days of Padre Pio 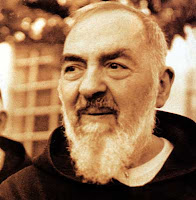 Padre Pio seemed most hesitant to discuss either his wounds or the reported incidents of bilocation. He seemed hesitant because in life he did not understand them at all. In fact, a Vatican investigator learned that all the events of bilocation were reported by others, and never by Padre Pio himself. It wasn’t until he was directly asked by the investigator that he described bilocation:


“I don’t know how it is or the nature of this phenomenon – and I certainly don’t give it much thought – but it did happen to me to be in the presence of this or that person, to be in this or that place; but I do not know whether I was there with my body or without it . . . Usually it has happened while I was praying . . . This is the first time I talk about this.” (Padre Pio Under Investigation, Ignatius Press, 2008, p. 208).

Those September days preceding Padre Pio’s death in 1968 must have been the strangest of his life. The visible wounds became so central to his sense of self for a half century that I imagine he had difficulty even remembering a time when the wounds were not present. Even a great burden carried for years upon years – I have learned the hard way – can become a part of who and what we are. We cannot imagine Padre Pio without these wounds. We would have never even heard of Padre Pio without these wounds. So in that sense, the wounds were not for him. They were for us... (continued)


Read More at These Stone Walls