Is the Higgs Boson the “God Particle?”

...If ever you bristle about the typical anti-Catholic mythology that religion attempts to hold back science, remember that the originator of all the science behind this model of creation was a Catholic priest, and many of the great scientists of his time did everything they could to suppress his ideas. They failed because they could not successfully refute either his faith or his science. In the end, even Einstein bowed to Father Lemaitre declaring that his model “was the most satisfactory explanation of creation I have ever heard.” If you have not read “A Day Without Yesterday,” please do. 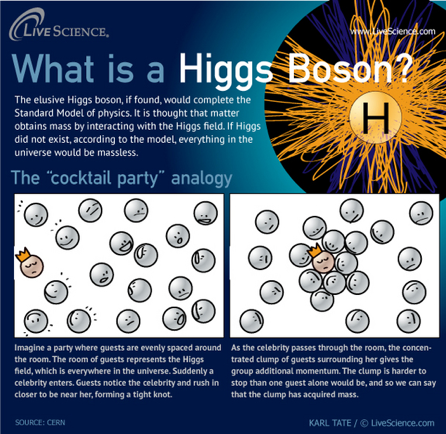 Pope Pius XII applauded Father Lemaitre’s discovery of The Big Bang because it challenged the acceptable science of the time which claimed that the Universe was not created, but always existed and is eternal. Einstein later acknowledged that this “Cosmological Constant” was his greatest error...

On July fourth, physicists announced they had a momentary glimpse of the elusive Higgs boson, the subatomic particle long theorized to exist, and without which matter itself would not exist. The physicists who reported that they only found “evidence” of the Higgs boson are just being careful scientists. The discovery has a 99.9999% rate of certainty. There is no doubt left. The Higgs boson does indeed exist.

The short answer is “no.” Imagine for a moment that you’re on an archeological dig on the outskirts of Rome. Standing in your carefully excavated hole, your spade strikes a metal box. Inside you discover a small, worn chisel, and a note written in 16th Century Italian: “Herein lies my favorite chisel.” The note is signed, “Michelangelo Buonarroti.”

Well, if you’re an art historian, what you now hold might be priceless. If you’re also a person of faith who has viewed the magnificence of Michelangelo’s Pieta, you may treasure this forever as one of the tools used to create a work of artistic genius. Your discovery might land on a shelf with your name on it in the Vatican Museum. There will be no doubt that what you discovered is a tool used to create an inspired work of art, but it is not itself the art’s creator.

What does the discovery of the Higgs boson mean for faith in a Universe created by God? Absolutely nothing. To say that the Higgs boson and gravity are responsible for the creation of our Universe is sort of like saying that Michelangelo did not sculpt the Pieta, his chisel did... (continued)


Read More at These Stone Walls
Vincenzo at 11:57 PM
Share