Father Rutler: Saint Francis of Assisi was not a garden gnome

On October 4, we give thanks for one of the best known and least known of all saints. Least known, that is, because Francis of Assisi was not a garden gnome, or a doe-eyed hippy skipping with animals and hugging trees. Garden gnomes do not bear the Stigmata of Christ's wounds. A vegetarian? He berated a friar for wanting to abstain from meat on a feast day and said that on Christmas he would “smear the wall with meat.” An iconoclast? He was meticulous in the ceremonials of the Mass, insisting that every sacred vessel and vestment be the best, and his Rule dismissed any friar who parted from the Pope on the slightest article of Faith. A pacifist? He joined the Fifth Crusade, simmering ever since eleven thousand Muslims had invaded Rome and desecrated the tombs of Peter and Paul in the year 846. Francis went to North Africa in 1219 to convert the Muslims and confronted Sultan al Malik al-Kamil, who had just slaughtered five thousand Christians at Damietta. Francis fearlessly told the Sultan: “It is just that Christians invade the land you inhabit, for you blaspheme the name of Christ and alienate everyone you can from His worship.” While counselors called for the beheading of Francis according to Muslim law, the Sultan was so taken with the humility of Francis that he only had him beaten, chained and imprisoned, and then he released him. 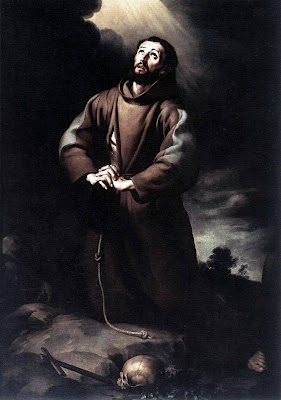 We are engaged in similar challenges today. Of course, we are aware of the crisis in the Middle East, but the strife is worldwide. Consider Nigeria, whose Catholic population in the last century has soared to nearly twenty million. Last week, under Muslim pressure, the government stopped the Eternal Word Television Network from broadcasting. I have worked with this worldwide Catholic network for twenty-five years and have many Nigerian friends. Two days after the Nigerian bishops objected to this censorship, a Catholic church was destroyed by Muslims, who killed and wounded many worshipers. This seems to be under the radar of our own government and the mainstream media.

May Saint Francis be our model in how to deal with the threats of our own day: not enfeebled by sentimentality and relativism, but armed with a Franciscan zeal for the conversion of souls. We may not have Francis’ charm, but we have in our hearts and churches the same God. By the way, the popular “Prayer of Saint Francis,” which begins, “Make me a channel of your peace,” was actually the work of an anonymous author who published it in France in 1912. Its vague theology and lack of mention of Christ, express a semi-Pelagian heresy unworthy of the Saint of Assisi. Let the last words of the real Saint of Assisi be our guide: “I have done what was mine to do; may Christ teach you what you are to do. Do not seek to follow in the footsteps of the men of old; seek what they sought.”