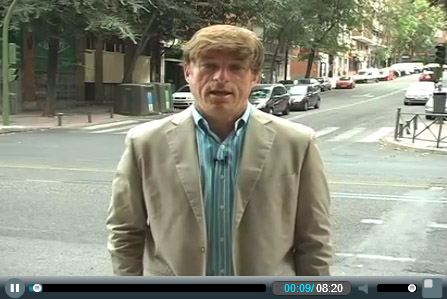 From over here in Madrid in the midst of World Youth Day coverage .. we unfortunately have to issue this response to an article that was published by Catholic News Agency last week.

There are really two different stories here so we will address them separately.

What the article did not make clear is that this is the case because St. Michael’s Media has not filed the annual reports that were supposed to be filed. That is entirely my fault. I have oversight to do that. I did not do that. The reason is simply because I did not know that had to be done.

When St. Michael’s Media was established back in 2006 .. we had a short term helper who was handling all the paperwork issues with the state. When that worker left .. I did a poor job and allowed things to get sloppy. We are now in the process of getting our records up to date and will file the appropriate back records.

The State of Michigan website that addresses these sorts of issues clearly states that when the paperwork is corrected .. the company is re-established in good standing as though nothing had gone wrong. There is a small $5 fine to have to pay for each back annual report and we will of course pay that along with filing the reports and bringing St. Michael’s Media up to speed.

Again .. totally my fault and I accept the responsibility. I am working to fix the situation which was caused by me, and I will have it all done in as short a time as possible.

Secondly .. regarding the issue of Simon Rafe and his online writings in question, which he has since taken down. I spoke with Simon at some length on a couple of occasions here from Madrid when this was first brought to my attention.

He was immediately forthright and admitted they were his and that they were very inappropriate. He said he should not have written and published them. He expressed his great sorrow. He has in fact issued a very specific apology on the web on his own with no prompting from anyone.

In speaking with Simon, I have no doubt whatsoever about the sincerity of his apology nor his realization that what he did was wrong both personally and professionally.

He has already taken steps to address the personal aspects of this. Professionally .. the owners of the website domain realcatholictv.com have determined that for the foreseeable future, Simon’s duties will be curtailed to only those that involve technical and administrative duties. He will not be hosting any new productions. This is also true with regard to any functions he performs for St. Michael’s Media.

Now with regard to some background points on the article itself and some interesting points NOT addressed.

501c3 is a designation awarded by the US federal government, the IRS .. NOT the state of Michigan.

There are two things at play here. The status of the business in state of Michigan and secondly the 501c3 status awarded by the IRS.

While I let the state side of the paperwork go, the IRS paper work is up to date and the 501c3 status has never been a question.

And furthermore .. with regard to not filling out paperwork with the state .. or being behind .. there is now information on various blogs which make the claim that Catholic News Agency or its affiliate is 4 years behind on its own filings.

We are not reporting this because .. frankly .. we don’t care. Businesses fall behind on paperwork for hundreds of reasons everyday. We don’t think its an issue. It doesn’t have anything to do with the salvation of souls – so again, we don’t care.

I have communicated to management at CNA that I think it was unfair to publish the story when they did. The reporter called me here in Madrid Spain during a very hectic time of production for us .. sprung a series of questions on me of which I was incapable of answering at that moment .... agreed with me that I needed time to get to the bottom of things .. and then published an article.

We think that was unfair and portrayed us in a bad light.

During my conversations with the Catholic News Agency it has been revealed to us that they get all kinds of secret anonymous stories about either me or our work .. all trying to depict me or our work in a very bad light. The same is true with this story .. it came through an anonymous source.

The owners of the website realcatholictv dot com are aware that because of some of what we talk about in various programs .. we have developed enemies in the Church.

Sad as that it .. it is the reality. If the person who knew about these problems did not come to us first privately as a brother in Christ to point them out .. but went instead as an anonymous source to the Catholic media .. to gin up an air of suspicion about the efforts of St. Michael’s Media as well as the website realcatholictv.com .. then perhaps CNA should be investigating THAT instead.

Anyone who has spent anytime in the world of Church politics knows that there are some people who can be absolutely immoral in the way that they deal with others. Jealousies .. turf wars ..

financial fights .. personality clashes .. lies .. vicious personal attacks .. thanks to original sin and personal sin .. all of these unfortunately mar the Body of Christ.

We are very aware that there are many people in the Church who have it out for us. We aren’t playing victim .. merely stating the reality that we confront almost daily and has now been confirmed for us by the Catholic News Agency.

In that respect we are not unlike many other groups on the web who are also maligned .. often by members of the clergy in Canada for example, who smear good and faithful Catholics with terms like “Taliban Catholics.”

We have it on good information that this is what was behind the issuance of a press release on the part of the WYD committee and USCCB that realcatholictv dot com had not been “APPROVED”. Of course nowhere in that press release was it mentioned that being APPROVED is not necessary. That was a smoke screen charge to make us look bad.

Nowhere did it mention that there are dozens of other groups that are here in Madrid who are also NOT APPROVED. They were active in passing out loads of flyers and information promoting their own events and causes. We even collected a few of them as they were handed to us. Here they are.

In one marvelous example of what OFFICIALLY APPROVED means or doesn’t mean .. a fantastic young pro-life group from Ireland that had received no official approval had a high ranking prelate publically address them.

In the mayhem and chaos of World Youth Day .. official approval means absolutely next to nothing on the ground. We find the Press Release issuance singling us out beyond ridiculous.

We spoke to around a thousand young people at our two No Bull in Madrid talks that were fabulously received. You can check them out for yourselves right on line. We’ve included the links. We even had a notable archbishop sit in on of them.

So bottom line .. yes I failed to file the paperwork for the state of Michigan as I should have. Now that the owners are aware of Simon’s very inappropriate writings .. the necessary steps have been taken to assure our integrity as well as helping Simon .. a dual duty we feel we have.

Nonetheless .. we are grateful that this has come to light so that we could address them. We consider this constant stream of anonymous charges as despicable and highly uncharitable.

Not filing paperwork in a timely fashion hardly constitutes a headline during world youth day.

If the genesis behind this anonymous source .. which we heavily suspect .. is someone with an axe to grind about reports we have done on lack of leadership .. or watered down catechesis or the questionable financial and theological positions of the Social Justice club inside the Church .. or any of a hundred other problems which need to be addressed and not ignored or covered up .. if the goal is to intimidate or malign us .. then thank you for finally showing your fangs. At least now .. many others can see what we have seen for some time now.

We sincerely wish all these people .. and we are NOT talking about the Catholic News Agency ..

who consider themselves our enemies .. who constantly blather on about charity and tolerance and dialog would follow their own advice.

If they have a problem with us .. and again .. we’re aren’t talking about the CAN .. they should confront us like a man .. not some sniveling school girls who resort to tattle tales and smear campaigns.

We pray for unity in the Church. But unity cannot come at the sacrifice of the truth.