Church Inquiry May Pit Pope Against a Popular Bosnian Shrine 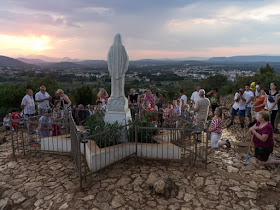 Roman Catholic pilgrims on the hill above the small Bosnian town of Medjugorje, where in 1981 a group of six youths said the Virgin Mary appeared to them. Three say they still see her daily. Credit Ziyah Gafic for The New York Times

(The New York Times) MEDJUGORJE, Bosnia and Herzegovina — At exactly 6:40 p.m. one sultry day this month, the peal of church bells rang though the main square of this town, bringing countless pilgrims instantly to their knees.

The ringing marked the moment, 34 years ago, when a group of six youths say the Virgin Mary appeared to them. Three of them say she has continued to do so, usually at the same time, every day since.

Over that period, the scheduled apparitions have drawn millions of believers to this small town, and a good dose of suspicion from skeptics, including, perhaps, Pope Francis. In what was interpreted as a thinly veiled jab at the claims, he recently joked during a morning homily about “visionaries who can tell us exactly what message Our Lady will be sending at 4 o’clock this afternoon...”

Already, since the pope announced in June that a decision was imminent, the numbers of Italians — once the bulk of the pilgrims here — have fallen by half.

“Whatever the verdict turns out to be, this wait is creating a state of uncertainty for the pilgrims, and that affects the season,” said Sante Frigo, an Italian married to a pilgrim guide in Medjugorje.

“From the point of view of the pilgrimage supply chain,” he added, “it’s been a catastrophe.”

Faith aside, for the residents of a town that once barely survived on tobacco plantations and vineyards, the claims of apparitions have been an irrefutable blessing...

Doubters accuse the visionaries of blurring the line between the spiritual and the material by capitalizing on the apparitions through global speaking tours and investments in the local tourism industry.

“You have to bear in mind that the visionaries have built economic interests here,” said one skeptic, Marco Corvaglia, a high school teacher who chronicled what he claims are the visionaries’ conflicts of interest on his blog.

He started his blog, he said, out of concern that millions were being duped by the collective power of suggestion. The Medjugorje apparitions, he and other skeptics believe, are nothing other than an “instrument of mass manipulation...”

On a recent afternoon, one of the three who still claims to see the Virgin daily, Ivan Dragicevic, 50, took to a stage built behind the parish church — with outdoor seating for about 9,000 — to share his experiences with pilgrims braving the heat.

Mr. Dragicevic, who lives in Boston and in Medjugorje, spoke of his conversations with the Virgin, as pilgrims from around the world listened to a simultaneous translation broadcast on various radio frequencies. A group of Frenchwomen took copious notes.

Once he had finished, he quickly left, brusquely declining requests for an interview.

At Magnificat, a guesthouse built three years ago by one of the daily seers, Marija Pavlovic, also 50, graciously greeted pilgrims, offering words of comfort and blessings.

The hotel itself has been a source of controversy. While Ms. Pavlovic describes it as a “center of spirituality,” it is actually a “luxury hotel,” Mr. Corvaglia and other critics say.

Ms. Pavlovic, who divides her time between Italy and here, also declined to be interviewed. “We don’t want to throw fuel on the fire,” she said. “We want to wait until the waters calm down...” (continued)

Mark Zuckerberg - why are you picking on priests while apologizing to "others"?

Hey Mark Zuckerberg and Facebook - why are you picking on priests while apologizing to "others"?
Friends, have you heard about this? Facebook is forcing members of religious orders to remove their titles – their spiritual and vocational identities like "Monsignor" and "Father" – when using the social media monopoly, while permitting everyone else to use titles like "Father". In fact, Facebook just publicly apologized "to drag queens, drag kings... ," etc. for any confusion regarding THEIR allowance to use whatever names and titles they choose on Facebook, like "Father"! Surely this is just a management oversight, eh? Granted, they're a monopoly, but if enough of us speak up about their intolerance, then let's hope they get the message and allow freedom of religion. If not, there's not much point in any of us hanging in there with Facebook, right? Here's my coverage of the issue in One America News Network: https://youtu.be/TiWdu--ZU6Y

(Mediaite) Listening to New Jersey Governor Chris Christie talk about his sex life isn’t exactly anything anyone wants to hear right now. Unfortunately, potential voters in a New Hampshire restaurant had to hear all about it on Tuesday morning.

Christie is just one of the many GOP candidates who have made stops in the New England conservative state. While discussing his Catholicism and whether or not religion had a place in politics, the governor addressed the often touchy subject of contraception:


“I’m a Catholic, but I’ve used birth control, and not just the rhythm method, okay?”

That’s when a man seated in front of Christie, wearing a white shirt and a red tie, dropped his head in his hands in the hopes of disguising his smirk. We don’t know his name or who he is, but he just became our nation’s everyman:


The New Jersey governor continued, arguing his “church has a teaching against birth control,” but his use of contraceptives doesn’t make him “an awful Catholic.”