It's official: Pope has not abolished sin, says Vatican 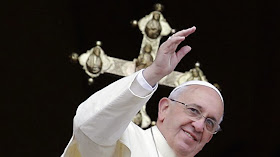 VATICAN CITY (Reuters) - The Vatican felt compelled on Tuesday to deny that Pope Francis had "abolished sin", after a well-known Italian intellectual wrote that he had effectively done so through his words and gestures.

The singular exchange began on Sunday when Eugenio Scalfari, an atheist who writes opinion pieces for the left-leaning La Repubblica newspaper, published an article titled "Francis' Revolution: He has abolished sin".

Scalfari, who held a long private conversation with the pope earlier this year and wrote about it several times, concluded in the complex, treatise-like article that Francis believed sin effectively no longer existed because God's mercy and forgiveness were "eternal".

Vatican spokesman Father Federico Lombardi told Vatican Radio that "this affirmation that the pope has abolished sin" was wrong.

"Those who really follow the pope daily know how many times he has spoken about sin and our (human) condition as sinners," Lombardi said.

It was not the first brush between the Vatican and Scalfari, who founded La Repubblica newspaper in 1976.

Last month the Vatican removed from its website the text of Scalfari's transcript of his conversation with the pope, saying parts of it were not reliable.

Scalfari said he had not used a tape recorder or taken notes when he met the pope but reconstructed the long session from memory afterwards and made additions to help the flow of the article.