The scales of Saint Michael the Archangel symbolize the balance of God’s justice with God’s mercy. Can the Church reflect justice with mercy for fallen priests?

(These Stone Walls) A few older posts on These Stone Walls keep showing up in our monthly stats revealing new reader interest. Nine months after I wrote “Father Benedict Groeschel at EWTN: Time for a Moment of Truth,” it still draws lots of readers and new comments. Another post, “Goodbye, Good Priest! Father John Corapi’s Kafkaesque Catch-22,” is two years old this week, but still draws scores of readers searching for news of Fr. Corapi. A reader sent me a well written take on that controversy titled “Father Corapi and Praying for Priests” posted June 6 by Matthew Brower on his blog, Catholic Stand. Part of it caught my attention:


“I am aware of some of the events that transpired when things seemed to fall apart for Fr. Corapi and there is much more that I do not know. During those days it seemed like the Catholic media and blogs were spilling over daily with reports and wild speculation. Some of what was reported was no doubt true but it certainly seemed to me we were witnessing a sort of Catholic tabloid frenzy where the line between fact and irresponsible speculation was blurred. I believe very few do have all the relevant facts.”

Matthew Brower, an attorney in private practice in Montana, is a Notre Dame alumnus who earned his Juris Doctor with honors at Ave Maria School of Law. His post two years after Fr. John Corapi’s fall from grace is not at all a defense of the priest, nor do I defend him here. That wasn’t Mr. Brower’s point and it isn’t mine. He wrote further:


“Most of those I know who looked up to Fr. Corapi as an inspiration and confirming voice have remained close to the Church and seemingly grown in faith, understanding well that it is God alone we worship and not those he has sent to draw us closer to Himself.”

I say “AMEN!” to that, and “Bravo” to Matthew Brower for having the courage to point it out. I have written elsewhere that I became very uncomfortable with the pedestal upon which Father Corapi stood – whether he wanted to stand there or not, I do not know – and from which he fell from grace two years ago with a loud crash. I was troubled by the self-description of so many of his admirers that they were “followers” of Father Corapi. It was a lesson learned. I don’t want followers. I can’t have followers. I don’t recall the specific post, but I remember writing a plea to TSW readers in reaction to this: “Please don’t follow me. Follow Christ!” If ever the day comes that I point only to me and not to Christ, it is that day that I must stop writing.

There is another of my posts that endures in reader interest, and it shows up in current stats more than any other. It was written nearly three years ago, but it drew over 300 new readers in May. That post is “Angelic Justice: Saint Michael the Archangel and the Scales of Hesed” in which I wrote about the symbolism of St. Michael’s iconic scales.

After that post was published, readers sent me dozens of holy cards with icons of Saint Michael (laminated cards are not allowed), all of which are now on my cell wall. One is on my coffee cup. Some of the nicer icons have since migrated over to my friend, Pornchai’s side of the cell. When I inquired, he said, “Well … umm … He does have wings, you know!”

After posting “Angelic Justice,” a friend sent me a Saint Michael medal. On the back is engraved, “Justice for Fr. Gordon MacRae.” It’s very nice and a privilege to wear, but there is a lot more to the story of Saint Michael. He isn’t just the Patron Saint of Justice. He is the Patron Saint of Mercy as well, and the two cannot be separated for as that post reveals, they are among the highest attributes of God in Judeo-Christian tradition. 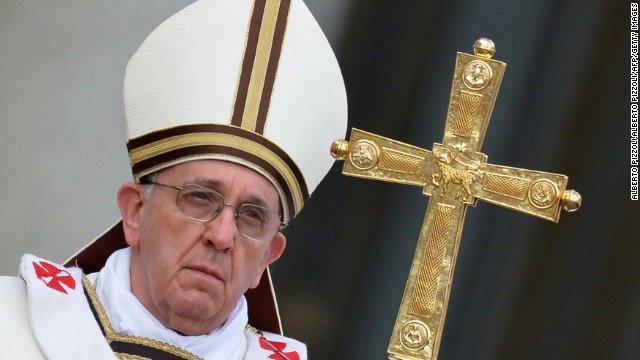 (CNN) – Pope Francis said a “gay lobby” exists inside the Vatican, according to a Catholic website, a surprising disclosure from a pope who has already delivered his share of stunners, and a resurrection of church conflicts that had bedeviled his predecessor's papacy.

“In the Curia,” Francis said, referring to Catholicism’s central bureaucracy, “there are holy people. But there is also a stream of corruption.”

“The 'gay lobby' is mentioned, and it is true, it is there,” Francis continued. “We need to see what we can do.”

Hints of a "gay lobby" at the Holy See surfaced last year in reports about a series of embarrassing leaks to Italian journalists.

Cardinals appointed by Pope Emeritus Benedict XVI to find the source of the leaks investigated high-level Vatican clergy involved in homosexual affairs who might have been vulnerable to blackmail, according to La Repubblica, a leading Italian newspaper.

The "Vatileaks" scandal factored in Benedict's shocking decision to resign, according to some church experts, as it impressed upon the 86-year-old pontiff that the modern papacy requires a vigorous presence.

Francis' enigmatic comments came during a meeting Sunday with CLAR, the Latin American and Caribbean Confederation of Religious Men and Women, who head Catholic communities of priests, sisters and monks. The Chilean website Reflection and Liberation, which focuses on liberation theology, first reported Francis’ remarks.

A Vatican spokesman told CNN, "The Holy See Press Office has no official comment on the private meeting."

Gay and lesbian Catholic groups did not immediately respond to requests for comment.

The Survivors Network of Those Abused by Priests said, "structure, not sexuality, is the real issue."

"The church is a monarchy. Monarchs are unaccountable. So many monarchs are corrupt. This is true in both secular and religious institutions," SNAP said in a statement.

Other Catholics counseled caution about reading too much into the pope's remarks.

"We don't have any explanation of what 'gay lobby' means," said Rocco Palmo, a Vatican watcher who runs Whispers in the Loggia, a website on Catholic news and church politics.

"Naturally, some in the church will try to polarize or interpret this, but as the rest of us aren't pope, we still have to get further explanation," Palmo added.

Church experts say the Chilean report rings true since the wide-ranging conversation centers on concerns that Francis has made touchstones of his nascent papacy.

In contrast to the buttoned-up Benedict, Francis has earned an early reputation for speaking off the cuff, often ditching prepared remarks in favor of more informal conversations.

On Friday, Francis nixed his “boring” speech and instead took questions from young Catholic students. Asked by a little girl if he wanted to be pope, Francis laughed and said that only someone who “doesn’t love himself” would want the position.

"He has said some things that would turn Benedict whiter than the papal vestments," Palmo joked.

Francis told the Catholic leaders on Sunday to focus on the poor, that the Vatican must be reformed, and joked that whoever wagered on his long-shot election as pope “won a lot, of course.”

But his comments on the "gay lobby" are likely to gain the most attention, especially in the West, where Catholic leaders have been mounting a fierce fight against same-sex marriage.

After Benedict announced his resignation in February, reports circulated that a “gay lobby” had forced his hand.

The Italian newspaper La Repubblica reported that a church investigation into the leaks found evidence of a “gay lobby” within the Vatican but gave few details about it.

"Some high level clergy are exposed to the `external influence' – what we would call blackmail – of lay people to whom they are connected through ties of a `worldly nature,'" La Repubblica wrote.

The Vatican blasted the newspaper reports as “unverified, unverifiable and completely false.”

Francis is one of the few Catholic leaders to have seen the Vatican report.

The so-called Vatileaks scandal led to Benedict's butler, Paolo Gabriele, being convicted on charges last year of leaking private papers from the the pope's private office. He was sentenced to 18 months in prison.

John Allen, CNN’s senior Vatican analyst, has said it would have been odd if the Vatican report had not considered the possibility that "insiders leading a double life," including sexually active clergy, might be vulnerable to pressure to betray the pope.

“It seems a stretch, however, to suggest this is the real reason," behind Benedict's resignation, Allen said. The veteran Vatican-watcher said it's more likely the pope resigned for his stated reasons, that he's elderly and wanted a younger man to take the demanding job.

Those demands include overhauling the church's central bureaucracy, which has been riven by infighting and turf wars, according to Vatican insiders.

In one of his first actions as pope, Francis created a council of eight cardinals, including Cardinal Sean O'Malley of Boston, to offer suggestions on reforming the Vatican.

“The reform of the Roman Curia is something that almost all Cardinals asked for in the congregations preceding the Conclave,” Francis said, referring to the meetings that led up to his election in March. “I also asked for it.”

But Francis said that he cannot promote the reform himself. “I am very disorganized,” he said “I have never been good at this.”

Instead, the pope said, he is relying on his eight appointed cardinals to move the reforms forward.

(The Washington Times) A South Carolina valedictorian garnered wild applause after he ripped up his pre-approved speech and delivered the Lord’s prayer at his high school graduation on Saturday.

The act was apparently in protest of the Pickens County School District’s decision to no longer include prayer at graduation ceremonies, Christian News reported. Officials said the decision was made after the district was barraged with complaints by atheist groups.

But that didn’t stop Roy Costner IV of Liberty High School. He ripped up his graduation speech for all to see, before he started talking about his Christian upbringing, Christian News reported.

“Those that we look up to, they have helped carve and mold us into the young adults that we are today,” he said. “I’m so glad that both of my parents led me to the Lord at a young age.”

“And I think most of you will understand when I say…” he paused. “Our Father, who art in Heaven, hallowed be Thy name…”

The auditorium began to erupt with applause and cheers.

“Lead us not into temptation, but deliver us from evil,” he continued. “For Thine is the Kingdom and the power and the glory, forever and ever. Amen.”

“The bottom line is, we’re not going to punish students for expressing their religious faiths,” he told Christian News. “He’s a graduate now. There’s nothing we can do about it, even if we wanted to.”

Attendee Logan Gibson told reporters that he thought “it took a lot of courage” to do what Mr. Costner did, Christian News reported.

As of noon Wednesday, a YouTube video of the exchange had received almost 45,000 views.

Vincenzo at 4:15 AM No comments:
Share
‹
›
Home
View web version