Pope gets radical and woos the Anglicans

Two and a half years after the name "Josephum" came booming down from the balcony of St Peter's, making liberal Catholics weep with rage, Pope Benedict XVI is revealing his programme of reform. And it is breathtakingly ambitious.

The 80-year-old Pontiff is planning a purification of the Roman liturgy in which decades of trendy innovations will be swept away. This recovery of the sacred is intended to draw Catholics closer to the Orthodox and ultimately to heal the 1,000 year Great Schism. But it is also designed to attract vast numbers of conservative Anglicans, who will be offered the protection of the Holy Father if they covert en masse. 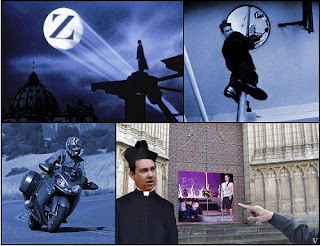 "As much I love the idea of a phone ringing in the offices of an expanded Commission, priests in cassocks and birettas sliding down fire poles, dashing to motorcycles, zipping off on jets with their Vatican passports to say Mass for groups who make requests…. Vincenzo could have fun with that..." - Father Z
Vincenzo at 12:35 AM No comments:
Share "While in the Holy City, I will do the usual plus the following: Pope watching, buy a new cassock and a high quality saturno, and quest for the geek cleric's holy grail, the fabled propeller zuccetto." - Fr. Richtsteig