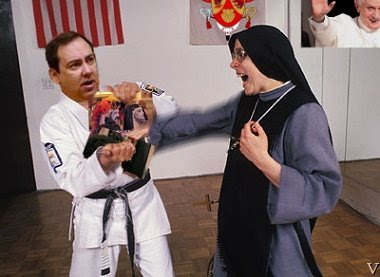 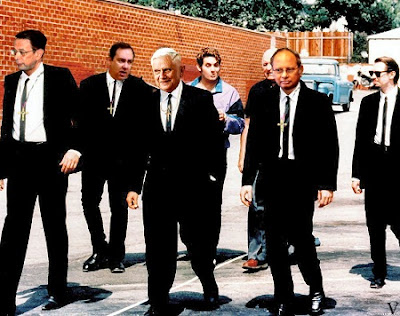 "Send the Kids Out of the Room" 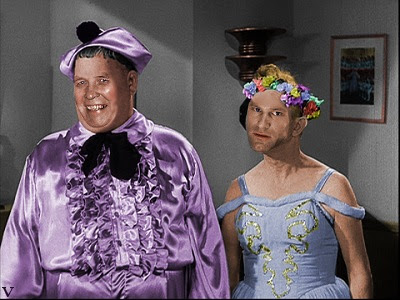 Cathy wrote: "As frightening as it is, this is not a Halloween costume photo. This is a photo of Terry and Ray before Holy Mass. I think I need to start posting on appropriate Mass attire again. I don't know what Ter was thinking going off-the-shoulder this time of year. I don't know what Ray was thinking with that shirt-period."

The Tale of a Nazi Mascot

The Littlest Nazi: Alex Kurzem was paraded before Hitler in an SS uniform

Almost all his life Alex Kurzem has kept a lonely secret. Born in Koidanov in the Minsk region of Belarus in 1935, he emigrated to Australia at 15, married and raised a family in Melbourne.

His sons grew up listening, spellbound, to their father's poignant, though light-hearted, wartime tale: of how, as a five-year-old pigherd, he became separated from his peasant family and had to fend for himself for months in a forest before being found by a kindly Latvian family who brought him up.

It was little more than a fairy story: the truth of Mr Kurzem's early life was, in fact, even more extraordinary and so brutally shocking that he had all but obliterated it from his memory.

The reality was that as a five-year-old boy he had witnessed the massacre of his fellow villagers, among them his mother, baby brother and sister. Kurzem escaped into nearby woods where he survived by scavenging and stealing clothes from dead bodies, until he was found and handed over to Latvian police, who "adopted" him as a mascot.

When the battalion changed its identity to that of a Nazi SS unit, it had a miniature uniform made for Kurzem, complete with the SS insignia and a full-length black leather coat and pistol. He was paraded for newsreels and newspapers as ''the Reich's youngest Nazi'' and taken to the Russian front with his squad.

There he witnessed atrocities. He saw rapes, murders and massacres of Jews, and on one occasion was forced to fire his pistol at a Jewish teenager captured by the soldiers, as the unit rampaged across the country. On another, he had to watch the slaughter of 1,600 Jews who were herded into a synagogue at Slonim.

The whole time, the young Kurzen was frantically trying to hide a secret that would have meant certain death for him: he, too, was a Jew. He watched atrocity after atrocity, unable to show the slightest compassion for those of his own faith.

Still, when the war ended the child had no choice but to speak up for Lobe: the man who had sadistically murdered so many of Kurzem's countrymen had also protected him and ensured his survival while all around Jews were dying in massacres, in concentration camps and in the gas chambers.

Today, Mr Kurzem is a grey-haired man in his seventies. He believes himself to be 72, though is uncertain of his exact age. His lined face and pained expression are testament to his torturous past.

Until a decade ago, he kept his solitary secret. Then, one night in 1997, no longer able to live with his nightmares, or his sketchy memories, he began haltingly to pour out the true story to his son Mark.

He gave a statement to the Holocaust Commission but, to his horror, it dismissed his tale, saying it could find no trace of the massacre in his home village, and going so far as to suggest he was a collaborator who was complicit in Lobe's war crimes.

"I was devastated," Mr Kurzem says. "During those terrible years with the SS I could trust no one. My own people, the Russians, despised me because I wore the Nazi uniform. I was terrified the Nazis would discover I was Jewish.

"Lobe was a monster, but he saved me and survival was all I had. I had to keep so many secrets that secrecy was a way of life. And then, to find that my own people didn't believe me when I finally told my story, was heart-breaking."

But Kurzem's son was determined to discover the truth. Painstakingly, over the past 10 years he has investigated his father's past. Finally able to verify it all with documents and pictures, the Holocaust Commission has reversed its decision and Mark has now written a powerful book, The Mascot, revealing his father's remarkable and horrific story.

Now in his seventies, Alex tells the story of his time as a Nazi mascot

Kurzem, of course, is not Alex's real name: that was the name given to him by the soldiers. He now knows he was born Ilya Galperin. His first clear memory is of October 21, 1941, the day his family was slaughtered. The day before his father and the men of the village had been shot.

That night two soldiers broke in and beat his mother. Once they departed, leaving her bloodied and bruised, she told her eldest son: "We are all going to die tomorrow." She knew the massacre of the Jewish women and children would be the next morning.

She told him he must be brave and help her with his brother and sister. That night the young boy awoke thinking: "I don't want to die." In his nightclothes he fled, stumbling through pits filled with the bodies of the Jews shot the day before. In the morning he awoke to the sound of screams. From the tree in which he was hidden, he saw women and children, weeping in terror, being lined up in front of newly dug pits.

"If only I had not looked," Mr Kurzem says softly. But he did. In front of him he saw his mother and siblings among those waiting to be shot. "I could see soldiers forcing people down the hill, using the bayonets. Then I saw my family. I wanted to call out. I wanted to go to her, but I couldn't. The soldiers shot my mother. They put the bayonets into my brother and sister. I had to bite my hands to stop myself screaming."

As he recalls his family's deaths, Kurzem grows pale and his hands tremble. "People have asked me why I didn't take my brother and sister with me when I fled, but I had no idea where I was going. I was just a child myself. Then, to see them murdered. I did not want to watch but I could not look away. I felt I owed it to my mother. If she could bear to endure it, then surely I should bear to watch and be with her in my heart."

Kurzem was in the woods for about nine months. He ate berries and dragged the great coat off a dead soldier. "What I remember most is the terrible cold and the constant hunger. And being so very alone," he recalls.

On July 12, 1942, he was found by a local who was not a Jew and handed over to the Latvian soldiers. Lined up along with others to be shot, he knew he had to take any opportunity. While others cowered, he ran to the soldiers, begging on bended knee for bread. His antics amused them and one, a Sgt Kulis, took pity on him and dragged him out of the line. He decided to clean up the filthy little boy and bathed him. When he saw Kurzem naked, he saw he had been circumcised and realised that, although the child was fair haired and of "Aryan" appearance, he was a Jew.

"I will never know why he saved and protected me," Mr Kurzem says. "But he did. He warned me no one must know or it would be certain death for us both."

Before long the little boy, now about six, had become the Latvian SS's famous mascot. In his uniform he was feted before the Führer, filmed keeping charge of German children ("Me, a Jew.Had they but known," he says incredulously) and taken to the Russian Front.

"I hated the soldiers' brutality, their inhumanity. But I don't deny that, as a little boy, I at times loved being the centre of attention. I was doing it to survive. To please them. But all the time I was terrified they would discover my real identity and I would also be shot for my faith."

It was at the front that he witnessed the infamous Slonim massacre in which 1,600 Jews were burned alive. "Soldiers were prodding people into the synagogue, then they hammered wooden planks across the doors and windows. They put bunches of burning sticks and branches against the building and in a flash it caught fire. The flames spread quickly and then terrible wails began. Women and children broke out, running into the road in flames. No one helped them, they burned where they fell."

On another occasion, the soldiers used the young boy to lure local girls to their camp where they savagely beat and raped them. And when the unit was used to round up Jews for the cattle trains to the death camps, Kurzem, resplendent in his uniform, was given the task of handing out chocolate bars to lure them inside.

"They were smiling, they thought it a kindness. I didn't know where these trains were going but I had heard enough of the soldiers' talk to know they were going to despair and death."

In 1944, as the tide of the war started to turn against the Nazis, Lobe sent Kurzem to live with a Latvian family who bullied him into writing an affidavit exonerating Lobe. Before long he was receiving anonymous hate mail from Jews who knew the truth of Lobe's atrocities.

Terrified, he booked a working passage to Australia aboard the SS Nelly, late in 1949. "I just wanted to start a new life, away from all the memories that I wanted to lose." His only luggage was a battered brown suitcase in which he kept photographs and documents of his past life. He took odd jobs, one of them with a circus. Eventually, he set up his own carpentry business and set about assimilating himself into his adopted country. He never, he told friends, wanted to return to eastern Europe. He told his wife, Patricia, and his children nothing of the truth of his past.

Then, that night in 1997, he could keep silent no longer. Since then, he and his son have travelled to his home village many times. He found pictures of his parents under the wardrobe of his old home and, when he summoned the courage, stood by the tree from which he had watched his mother and his siblings murdered.

"Finally, after all this time, I have been able to lay a rose on the grave of my mother," he says, smiling at the memory. "But when I stood at that spot, as a grown man, where I saw her die so bravely, I still had to cram my fist in my mouth to stop screaming."

Mr Kurzem is silent, his eyes moist. "Should I have been standing there with her, holding her hand? Holding the little ones? I have tortured myself with this. But one thing I know: my mother would have died desperately hoping I had survived."

• The Mascot: The Extraordinary Story of a Young Jewish Boy and an SS Extermination Squad, by Mark Kurzem, is published by Rider Books 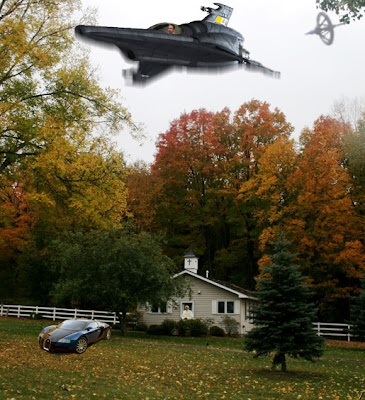 According to Cathy, "Yesterday, reports surfaced locally that a meteor was traveling over the Metro area from the NE to the SW.